Generally, internet users regard a 200 Mbps internet as a fast connection. With this speed, you can run most of the online applications with no real issue. However, internet technology is progressing fast.

Telecommunications companies race to come up with faster connections with each new product and service launch. But, if you have a household with three or four users, 200 Mbps internet speed will do the job. The next thing users might ask is, how much is 200 Mbps internet?

Before we delve further, let’s see if 200 Mbps is fast enough. Many users consider a 200 Mbps plan the most common internet speed provided by Internet Service providers. But is it fast? For instance, take a file download task – it will take 12 seconds to download a 300 MB file attachment.

It can also support online activities such as TV/video streaming, video conferencing, downloading videos, SaaS and cloud applications, and online gaming. In addition, you can easily connect up to 20 devices at the same time. 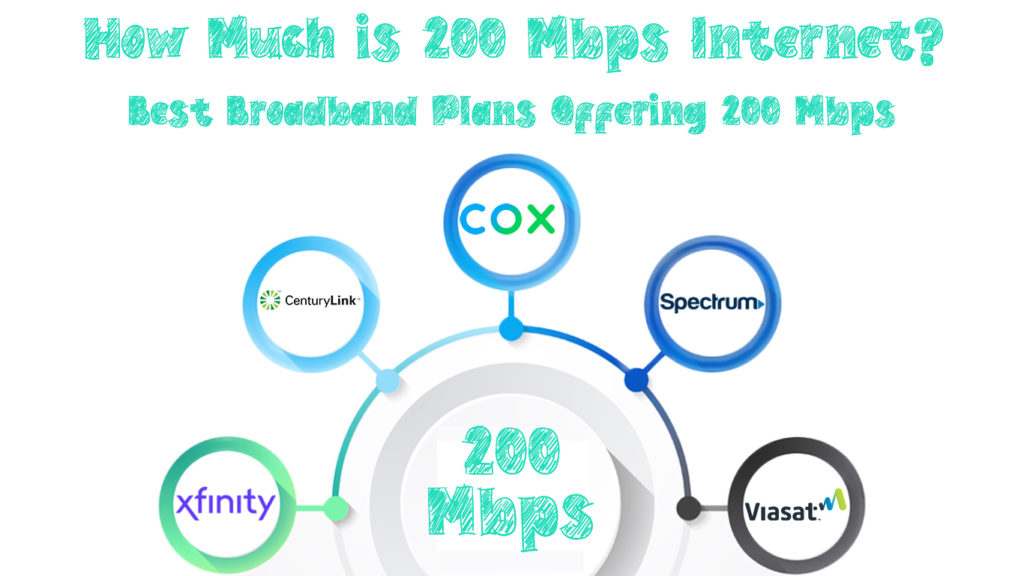 Spectrum’s standard plan offers an internet speed of up to 200 Mbps. It’s one of the best plans for many homes. 200 Mbps is sufficient for four users in an average home with regular online activities, such as video streaming, social media checking/interacting, and web browsing every day. However, you have to pay an additional monthly fee for the Wi-Fi router.

Spectrum Standard and Other Spectrum Plans:

Mediacom’s Internet 200 plan is suitable for families with one or two kids, at the most. With a download speed of 200 Mbps, you can do a variety of internet activities, such as TV/video streaming and maybe simple online gaming. The plan comes with a data cap set at 1 TB. For an average household, it’s hard to consume that much data in a month, so most families should be fine.

In addition, a Mediacom plan requires a contract. It could be a deciding factor for a customer to subscribe, but Mediacom currently offers free installation for online orders (valued at $99.99). It also offers three months free signal booster called Xtream Wi-Fi 360 (worth $15).

Mediacom Internet 200 and Other Mediacom Plans:

How to Improve Your Internet Speed

You will sometimes experience internet speeds much slower than what your Internet Service Provider is supposed to deliver. Yes, the ads state the maximum speed you can achieve, but there are factors that reduce your internet connection speed. Here are some tips to boost your internet speed:

Q: What is fast internet?

A: Generally, an internet speed of 200 Mbps is considered fast enough, although you won’t get 100% of the advertised speed. If you’re using Wi-Fi, you will get a somewhat slower speed. However, this speed is still adequate for typical home internet use scenarios, such as web browsing, streaming TVs/videos, and gaming.

Q: What is the world’s fastest internet speed?

A: The world’s fastest internet was recorded at 319 Terabits per second (or 319,000 Gbps), as recorded by a team of the best telecommunications engineers. That’s very fast, considering 1 Gbps achievable in some fiber gig plans is already lightning-fast for daily home internet usage. If you sort out the average internet speed by country, the countries with the fastest download speeds in the world are Singapore (209 Mbps) and Chile (207 Mbps). In comparison, the median speed in the United States is 152 Mbps.

Q: What is broadband internet speed?

A: The threshold for a broadband internet speed is 25 Mbps for download and 3 Mbps for upload. The standard was set in 2015, but today, that kind of speed is not considered fast anymore.

A: Xfinity and Google Fiber offer internet speeds up to 2 Gbps.

Q: What is an adequate internet speed?

Here is the harsh truth: if you want fast internet, you’ll have to pay more. But, the internet speed of 200 Mbps is generally considered a fast internet. You can get one of the pretty affordable plans offered by popular Internet Service Providers like Spectrum, Xfinity, Verizon, Mediacom, Cox, etc.

In this post, we have listed two affordable plans offering 200 Mbps speed and tried to answer the question from the title. In addition, we have provided some details about each plan and discussed their features and benefits.

Hopefully, now you know what to expect when it comes to internet plans and prices. Good luck finding the best plan and provider for your needs.