A robust home network that serves all your needs is one of the many ways to improve efficiency. Home networks that give users flexibility in managing their files and devices are a coveted possession. However, finding the best tools to ensure your network is at its optimum is not easy.

Most information pieces on file sharing suggest solutions such as cloud storage which are not as effective in a home network. Hence the alternative file sharing methods discussed below are essential for a home network. They include the best ways you can use to transfer files on the network depending on your operating system and devices. 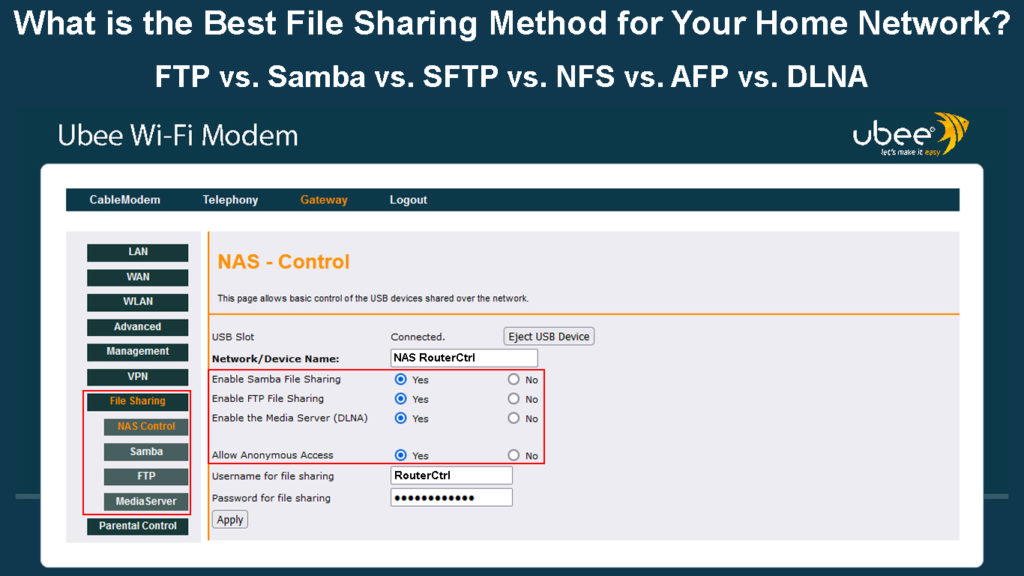 FTP is considered an application layer and among the oldest file transfer methods available. It uses the Transfer Internet Protocol/Internet Protocol (TCP/IP) to transfer files between computers. Computers, in this case, refer to a computer or a server.

FTP uses a server-client model of file transfer where the computer or server hosting the files is considered a server, and the device accessing or downloading the files is the client.

FTP uses two separate channels to transfer data between servers and clients. The first channel is the command channel, which controls the commands and replies, while the data channel handles the transfer of files.

FTP uses any of the following three modes to enable file sharing.

Data is transferred in a continuous stream in stream mode (MODE S) or partitioned into segments or blocks in block mode (MODE B).

You should configure the server to run FTP services when using FTP and set the client to access these services.

Until recently, most web browsers could access FTP servers, but there has been a shift, and many, like Chrome, no longer support FTP. Fortunately, a workaround is to use third-party programs to access FTP services as a client.

Some of these programs include FileZilla, Core FTP, and FTP Voyager. Alternatively, you can use the command line interface of most operating systems like Windows and Linux to share files via FTP. Some download managers can also work as FTP client software.

Unfortunately, FTP is not as security-oriented as most users would like considering it does not encrypt files. This vulnerability makes it easy to intercept your traffic which might contain sensitive information like passwords.

Another drawback is that FTP cannot share with multiple users at the same time, thus limiting its effectiveness as a file-sharing method.

The protocol can transfer large files at high speed, making it a choice to consider when sending files that do not carry sensitive data.

FTPS is an improvement on FTP that enables data encryption through Transport Layer Security (TLS).

Implicit FTPS configures the connection with TLS/SSL encryption at the beginning of data transmission.

That causes a problem for servers and clients that are not FTPS-compatible as the connection does not facilitate negotiation.

Explicit FTPS is also known as FTPES, which dictates that an FTPS client “ask” for encryption from an FTPS server. Then both client and server agree on a manual encryption method.

Should there be no inquiry from the client, the server can choose to continue the connection or block it.

Although FTPS tried to solve the security issue, it did not succeed. The SSL protocol is now defunct due to the numerous vulnerabilities it had.

This method is also known as the Secure Shell File Transfer Protocol and is also based on the FTP. SFTP uses a secure shell protocol (SSH) to encrypt the files and enhance security.

Users can use SFTP via a general user interface or through command lines. It is an upgrade of FTPS since SFTP has more features and encrypts commands to prevent man-in-the-middle-attacks.

SFTP can also allow one to pause transfers and resume them at a later time and is compatible with transfers over a firewall.

Since SFTP utilizes the SSH port 22, there are no open ports that can put the connection at risk. SFTP is normally used when sharing data over the internet but can also work for home networks, especially if you have security concerns like someone might be snooping on your network.

Samba is a free file sharing and print service software that uses the Server Message Block (SMB) protocol, which is also where the name Samba is derived.

SMB is a client-server protocol. It facilitates file sharing over a network, and it has grown over the years to support modern connection standards. Frequent updates to the protocol have also ensured vulnerabilities are sealed to avoid exploitation.

The primary function of SMB is to allow users to interact with documents without needing a local copy. Therefore, the original copy remains on the server, and different users can access it.

Apart from sharing files, the protocol allows the client’s application or user to create, view, and edit files remotely.

Samba is unique since it enables compatibility between Linux/Unix-like servers and clients with other operating systems such as Windows and macOS. Therefore, Samba is the best option for inter-operability in different systems on your home network.

NFS is a file system that allows access to remote files on a network. It is built to enable you to access files as if you were accessing them on local storage hence why it is a distributed file system.

NFS was built in 1984 by Sun Microsystems, a major Unix vendor, and it is made for easy portability to other systems. It has the server-client structure where the system housing a file is the server, and the device that accesses the files is the client.

NFS is an open standard, meaning anyone can build on it. It was meant to be a Unix protocol but was updated in a later version to work with more systems like macOS.

The ability of NFS to share files between various clients as if the files are local makes it a reliable system. It allows fast access to shared files and has fast system recovery in case of a crash.

There are a few not-so-severe NFS drawbacks, including the need for a firewall to prevent external attacks as the system does not cater to such instances.

Apple Filling Protocol is the best file-sharing system if you have multiple Apple devices in your home network that supports it.

The protocol is compatible with SMB, a Microsoft propriety, because most systems support SMB while few support AFP.

AFP is the most feature-rich protocol for macOS systems since it is compatible with other services such as Bonjour services and MAC aliases which other protocols are not.

AFP has file locking mechanisms that can restrict users from accessing dangerous files, enhancing security. It is also faster when sharing large files on Mac than other methods.

AFP was the default file sharing protocol in macOS 9 and earlier versions, but Apple has been slowly shifting to SMB, as seen in OS X 10.9 Mavericks. Apple Inc. also removed AFP server support from macOS in the Big Sur update.

DLNA is a certification standard, not a file transfer protocol, as many might think. A group of consumer electronics manufacturers formed the Digital Living Network Alliances to promote compatibility/interoperability among devices.

A DLNA-certified client can remotely access and play multimedia files in a DLNA-certified server on the condition of a highspeed home network. A practical example is playing videos from your computer on a TV screen.

DLNA only allows streaming and is therefore not a method of sharing files. But if you want to access and share the files, you can rely on DLNA-compatible software like Emby.

The alliance dissolved in 2017, stating that they had achieved their goal, but DLNA certification is still being conducted by SpireSpark International, a non-profit trade organization.

Therefore, if you intend to watch or listen to files on a remote server, consider using a DLNA-certified client and server as they are fashioned for that sole purpose.

After an extensive view of the various file sharing methods discussed above, choosing one that suits you will be easy. The strengths and vulnerabilities of each method should be an excellent place to start when deciding what method to choose. Also, consider the type of connection you have to avoid incompatibility issues. If in doubt, resort to your system’s native sharing method.