Can anyone do anything without a phone these days? While some people can find other things to do, most people, introverts or extroverts, couldn’t live even a second without looking at the phone.

They buddy with their gadget all the time; while working, studying, playing, eating, driving, and some sleep with the phone. Phone makers realize this attitude and add “Always on display” in their latest phone launches to cater to what the customers want.

You might wonder what happens on an airplane; can they use their phone on a flight? Will your phone’s cellular network work on a flight? No – the transmission towers of your cellular network will not reach the skies where the airplanes fly. But you’d be surprised that most passenger airplanes have inflight Wi-Fi, which we will describe later in this article. However, sometimes you can’t connect to flight Wi-Fi on your phone.

There are many reasons why it’s not possible to do that. In this article, we will walk you through how flight Wi-Fi works and why sometimes you cannot log in. So, let’s get started.

There are three different ways to get a Wi-Fi signal on an airplane while you’re flying. While you get varying signal speeds, all three work pretty similarly. 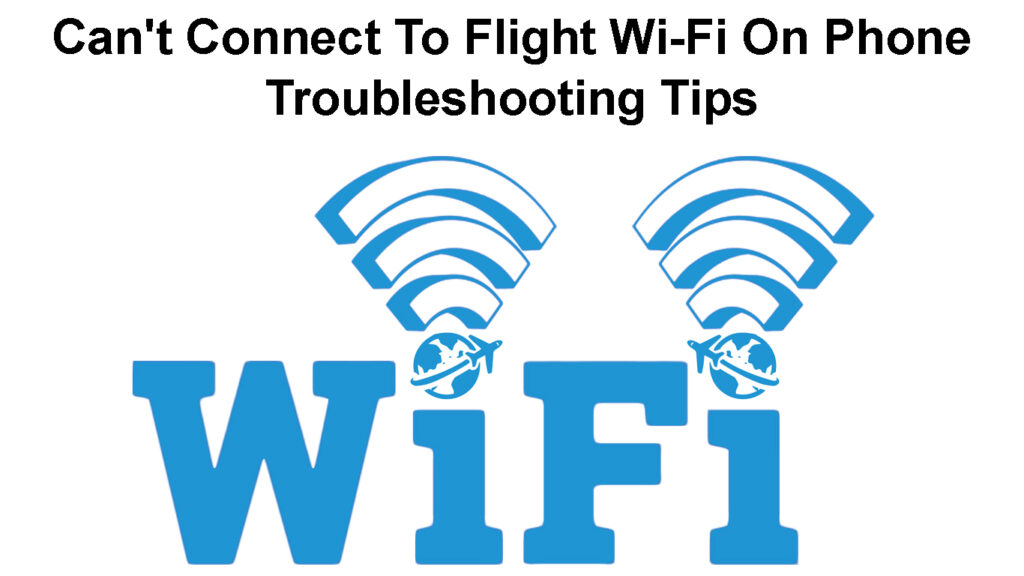 This method requires the Wi-Fi operator to attach two antennas at the bottom of an airplane’s fuselage (usually at the bottom front) so that they can easily capture the signals from the various ground-based transmission towers. However, you can only get internet signals as high as 3 Mbps with this method. But, it’s enough if you only want to check emails, browse the web, or send/receive WhatsApp messages.

It’s the next generation internet service on a flight, based on the satellite called the “Ku-Band” technology. In this method, the ground-based transmission disks beam up signals to the skies and are picked up by the satellites, which in turn, reflect the signals back and picked by the receivers attached to the airplane.

You can obtain internet signals as fast as 50 Mbps, but serving hundreds of users in an airplane reduces the speed significantly. In addition, the internet signals have to travel very long distances, from the ground transmitter to the satellite and finally to the airplane. Therefore, you can expect some latency issues when using the Wi-Fi network.

It’s similar to the “Ku-Band,” but it uses the upper region of the native frequency band that runs at 20-36 GHz. Currently, it is the fastest inflight Wi-Fi system available. Some airplanes use both the KU- and Ka-band systems to take advantage of the fastest signal available during the flight.

Here’s How Wi-Fi Works on a Flight

Why Can’t You Connect to Flight Wi-Fi on your Phone?

In the previous section above, we have tabled out three ways to have Wi-Fi while you’re on a flight. But somehow, occasionally, you cannot connect your phone to the flight Wi-Fi, even when you’re flying on a major airline.

The first thing you should check is whether your phone is operating under Airplane mode. This mode will not allow you to connect to the internet or make/receive any call or text message. That said, some phones might allow you to connect to Bluetooth devices and turn the GPS feature on since GPS does not involve data transmissions; it only receives and processes satellite signals. But if you want to connect your phone to the flight Wi-Fi, you should switch off the Airplane mode to activate the necessary features to use Wi-Fi.

It may sound weird, but typing an incorrect password is one of the major reasons why you cannot connect to a Wi-Fi network. Make sure you enter the correct password; for instance, sometimes, you might miss the uppercase letters. Moreover, today’s passwords tend to be more complicated and consist of a series of combinations between alphanumeric characters to secure the network from unwanted intruders.

You may have set for automatic software updates on your phone. However, often, you may need to download and install the phone software updates manually. It may take a while to update the software, but luckily most phone models can still run other tasks while the updating process is still running in the background.

How to Update an iPhone

Like many other electronic telecommunication devices, your phone may have developed some bugs or technical glitches when running multiple tasks. It would help if you could restart the phone to remove the bugs. Turn off the phone and after a short pause, turn it back on and let the phone reboot before you try connecting it to the flight Wi-Fi again.

How to Restart/Turn Off Your iPhone

Question: Do airlines allow the use of phones on a flight?

Answer: The Federal Communications Commission (FCC) doesn’t allow you to make phone calls on a plane. There are concerns that the radio waves emitted from a phone might interfere with the more critical flight radio communications. With that said, when more electronic devices became widespread, such as laptops, tablets, and smart gadgets like smartwatches, the FCC relaxed the rule a little bit. You can use them at certain times during the flights – other than when the airplane is taking off or landing.

Why You Can’t Make Calls on an Airplane

Question: I want to connect my phone to the flight Wi-Fi, but why is it not working?

Answer: Your phone might be on Airplane mode – you must have turned on the Airplane mode as soon as you entered the plane and forgot to switch the phone back to normal mode. Leaving the phone in airplane mode will block your phone from connecting to the flight Wi-Fi.

Question: What can my phone do if I turn on the Airplane mode?

Answer: When Airplane mode is on, you cannot connect to Wi-Fi, make/receive calls, and send/receive text messages. However, depending on the phone model, you can still connect Bluetooth devices, like headphones or tablets. In addition, you can also have the GPS feature on.

Question: What if I don’t switch to Airplane mode?

Answer: Your phone can connect to Wi-Fi, and the radio signals produced may result in interference with the flight radio communications. Although there are not many cases reported that a cellphone or other electronic device has caused interference, you can’t rule out the possibility of that happening.

Question: How can you tell if the phone number you’re calling is on Airplane mode?

A flight Wi-Fi works the same way as the other Wi-Fi networks, but it’s comparatively less stable because the airplane is always moving. While the Wi-Fi technology on flights is relatively new, telecommunications engineers are working fast to develop new techniques to get more reliable and faster in-flight Wi-Fi networks. For the time being, it’s probably pretty common that you can’t connect to flight Wi-Fi on your phone.