You have switched from a single-band 2.4 GHz router to a dual-band router that also supports the 5 GHz band, but you still don’t know if all the devices in your house will be connected to the 5 GHz network. Or your guests have requested a Wi-Fi password, but you are not sure if your 5 GHz Wi-Fi can handle so many connected devices at the same time. Follow us to the end and resolve any doubts regarding your questions.

Learn more about 5 GHz Wi-Fi in the next paragraphs, including how many devices can be connected to the 5 GHz band. 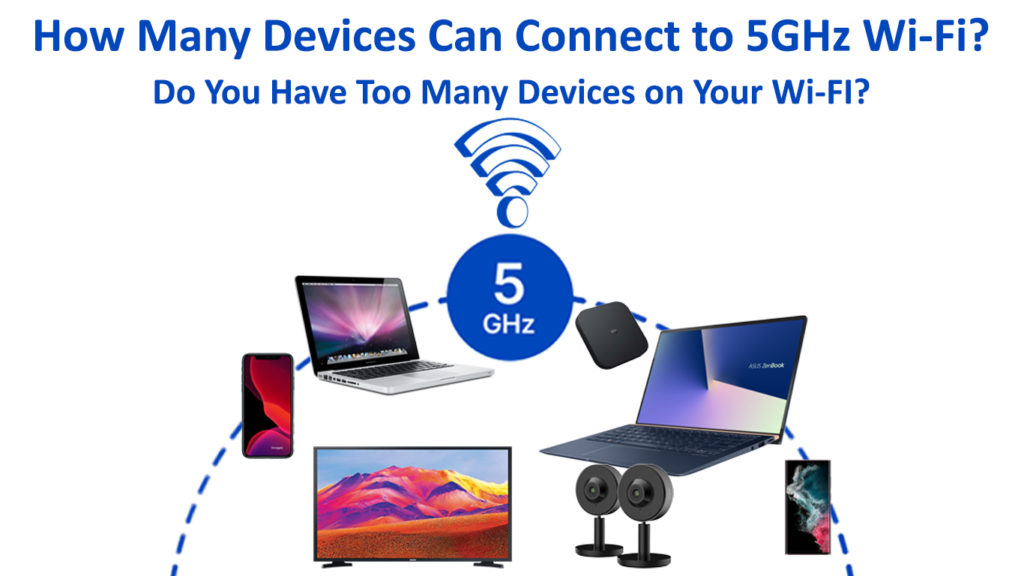 Why Is 5GHz Band Better Than the 2.4GHz Band?

When it comes to home Wi-Fi internet speeds, the 5GHz frequency provides the consumers with a greater bandwidth with little to no interference. Despite this advantage, it has a small coverage area and performs poorly when trying to penetrate solid objects.

The use of 2.4GHz results in greater range and penetrating power at the expense of speed and bandwidth.

In recent years, 5GHz Wi-Fi has gained a lot of popularity. Compared to 2.4GHz Wi-Fi, it has a greater bandwidth cap.

All these facts can affect the number of connected devices to your Wi-Fi network. 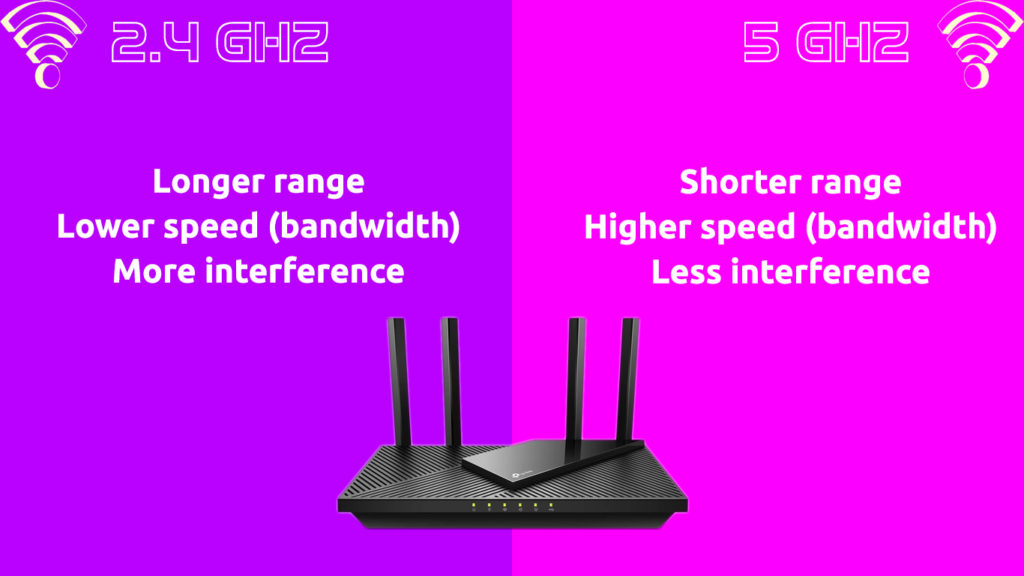 How Many Devices Can Be Connected to a 5GHz Wi-Fi?

The actual question is how many users can share a single 5 GHz access point till the consumer’s bandwidth needs can’t be satisfied anymore. That depends on a variety of factors.

It primarily depends on the capacity of your router. Routers can theoretically support up to 253 devices, but that’s just theory. In practice, some older routers can only handle up to 10. The number of devices that can be connected to the 5GHz frequency band depends on your internet bandwidth as well (on your internet plan and your subscribed speeds).

On the other hand, the 5GHz Wi-Fi band with a 4-channel configuration and 80MHz channel width can support data flow of about 200 Mbps. This is the largest amount of data that can be used when multiple devices are connected. But that doesn’t mean it is the maximum data rate that the 5GHz band can handle. So, the answer to your question could be that you can keep adding devices up until the data flow reaches 200 Mbps.

Third thing – if you have a densely populated neighborhood you must compete with your neighbors for the Wi-Fi channel. Wi-Fi net is similar to voice box radio. When two packets meet on the same channel, they both need to be sent again. But you are now using 4 of the 9 available Wi-Fi channels.

Surely some neighbors will use the same channel as you. Of all devices, no two devices can “interact” at once. This would cause network interference. Thus, the frequency of crashes and retransmissions increases with the number of devices.

This list is long and includes devices such as phones, laptops, PCs, smart speakers, other smart home solutions, streaming boxes, etc. However, the 5 GHz band is still not as populated as the 2.4 GHz band, which results in significantly less interference when using the 5 GHz band. So, the 5GHz frequency is your best choice for a strong and fast Wi-Fi connection as long as you’re within the range.

Some Routers Can Handle More Devices than Others

We are well aware that a certain number of devices can be connected to one router. This number is based on the router’s model, and will not depend on the Wi-Fi band it utilizes. However, the quantity of bands is still important.

So it is best to get the so-called dual-band or even tri-band Wi-Fi router. When a router is configured to support both 2.4GHz and 5GHz Wi-Fi, it is considered dual-band.

In comparison to a single-band Wi-Fi router, a dual-band router can handle more devices.

It’s quite likely that your router is dual-band if it supports 5GHz Wi-Fi.

But what is the most important factor? – Having a good router! Despite market beliefs that the cheapest router can connect up to 64 devices, when you join more than 10 devices, the remaining devices will probably all be disconnected. Even if they don’t get disconnected, you will notice a significant performance drop.

Mesh networking is actually needed if you wish to attach more than 50 devices. A mesh network consists of several routers for greater coverage and better connectivity.

Just keep in mind that your router, no matter how effective it is, cannot make up for a poor internet connection.

Should I Use the 5GHz Wi-Fi for All of My Devices?

The 5GHz spectrum is perfect for streaming, conducting conference calls, and playing online games. The 2.4 GHz band is better for lighter internet use. When connecting your devices to one or another band, you will usually have to choose between range and speed. If your devices are too far away from the router, use the 2.4 GHz band.

If the devices are close enough and support 5 GHz Wi-Fi, use the 5 GHz band. For your home network to operate well, make sure the connected devices are spread equally across those two bands – don’t connect all devices to the same band.

Can You Add More Devices by Combining 2.4GHz and 5GHz?

While the max number of available IP addresses in the DHCP pool is 253 (2.4 and 5 GHz combined), there can hardly be a router (even if it’s the latest tri-band Wi-Fi 6 router) that can handle so many devices.

That remains the theoretical cap, though. The real upper limit is significantly more modest.

It is important to note that 2.4 GHz and 5 GHz bands use different WLAN channels and it is convenient to combine them to avoid interference when connecting multiple devices. Congestion occurs when a channel is overloaded. Therefore, especially if you have seven or more devices, it is ideal to connect them using both bands – spread them equally.

Compared to 2.4GHz, 5GHz is considerably quicker. However, it sacrifices range to allow larger data rates.

If you have a large number of smartphones, laptops, or TVs in your home, our sincere recommendation is to connect them to 5GHz Wi-Fi. Thus, all those devices that you use every day and for which you need a fast Wi-Fi connection should be connected to the 5GHz Wi-Fi.

Besides that, 2.4GHz has a greater range and is wall-penetrable. You can use it for devices that do not require much bandwidth such as smart devices or LED lights.

The max number of devices you can connect to 5 GHz Wi-Fi or 2.4 GHz Wi-Fi is not solely dependent on the characteristics of the specific Wi-Fi band and the number of Wi-Fi channels. It depends on so many factors including your router hardware, devices you use, activities you perform, your internet plan (total available bandwidth), Wi-Fi interference, etc. A general rule of thumb is that a single router shouldn’t be responsible for more than 45 devices. Higher-end routers might be able to handle up to 100 devices, but there’s no guarantee.

If you want to drastically increase the number of devices on the network, setting up a mesh network is the best technique.