Wondering what a DHCP is and why it’s so important? Well, in this article, you’ll learn every important aspect of DHCP and whether you should enable it on your network. In addition, we compiled a list of major benefits and downsides of DHCP to make the decision much easier for you! 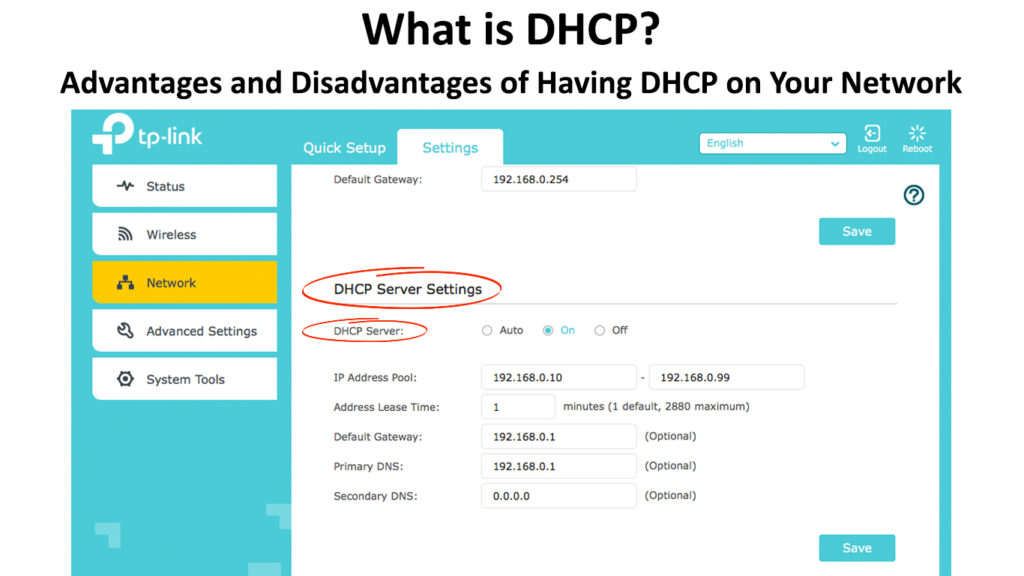 A DHCP is an abbreviation for the Dynamic Host Configuration Protocol. It’s a protocol that works in network management and is responsible for automating the process of device configuration on networks. As a result, devices will be able to access network services such as NTP, DNS, and others, and communicate with other devices on that network and other networks.

The Dynamic Host Configuration Protocol works on a DHCP server. This server automatically assigns IP addresses as well as other network parameters to devices. DHCP is not a must for every device. However, without it, the network’s administrator would have to set up each device that joins the network separately, which could make the process of communicating much more complicated.

In the DHCP server, every client is given a unique IP address that changes when the lease for that address expires automatically. That also reduces the workload of a network administrator.

DHCP has different components that allow it to work properly. The first one is the DHCP server we mentioned. All of the network setup info is held on this server as well as the information on the IP addresses, both the ones that are assigned already and the ones available for assigning.

The DHCP client is another important part of the protocol. The client is basically a device that needs to connect to the network. The device gets every important info on the network from the DHCP server.

The DHCP relay is another component of the protocol. The relay agent could be anything from a host to a router, and its main purpose is to receive the messages from the client and forward them to the server. Once the server prepares a response, the relay agent forwards that message to the client.

The relay agent is an essential part of the protocol as DHCP is unable to handle requests from various (sub)networks on its own. DHCP relay agents are used when a network is segmented into smaller subnets.

Other Essential Parts of the DHCP

An IP address pool (DHCP pool) is another integral part of DHCP. The pool includes the list of every IP address that’s available for assigning to clients. In most cases, the IP addresses will be assigned from the lowest to the highest. 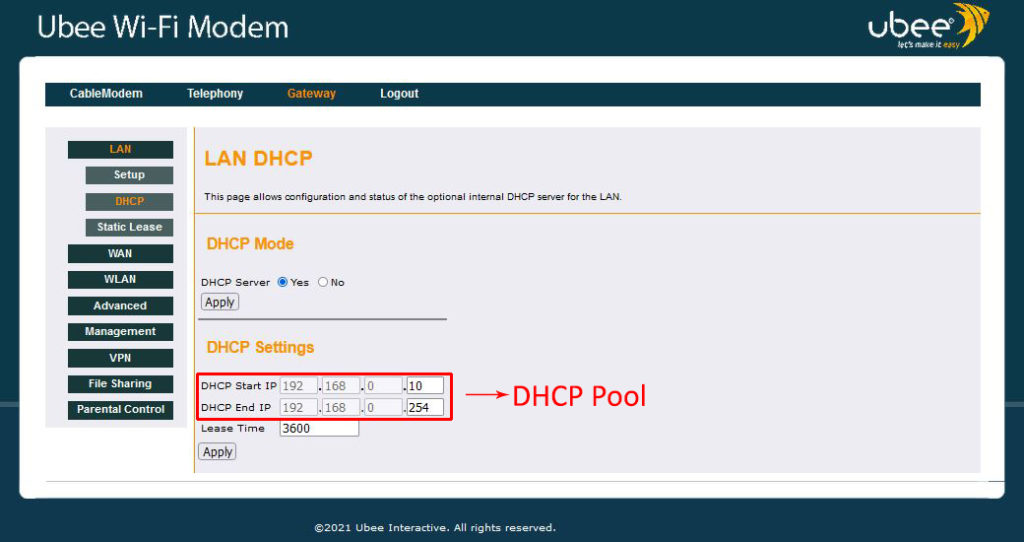 The lease time is another crucial aspect as it basically represents the amount of time a client will hold a certain IP address. After that period is over, the client has to renew the IP address. Lastly, the gateway address informs the host where the gateway is supposed to connect to the internet.

Why Should You Enable DHCP?

DHCP is extremely useful. What’s more, it’s pretty easy to set up and the whole process is automatic, which saves a lot of time and leaves less room for error. The Dynamic Host Configuration Protocol is also a great idea for mobile users because new configurations are acquired immediately after the network is changed.

In addition, DHCP reduces the workload of the network administrator. Without DHCP, everything would have to be set up manually, which can be a pretty tiring process, especially with a larger network. DHCP provides a centralized TCP/IP that is configured automatically.

Moreover, it gives the ability to define configuration from a central location and assign additional settings to the TCP/IP configuration via various DHCP options. In addition, the Dynamic Host Configuration Protocol efficiently works on IP address changes regardless of how many changes need to be made on a network.

Finally, DHCP provides an IP address configuration that’s consistent and reliable. That way, chances for setup mistakes are extremely small as the process is automatic instead of manual. Manual configuration could be risky due to frequent typos or IP address conflicts which happen when one IP address is assigned to multiple devices on the same network.

The Main Downsides of the Dynamic Host Configuration Protocol

Before you make the decision whether you need the DHCP enabled on your network, you should go over the disadvantages of the DHCP protocol and decide whether it will be worth it. A major downside to DHCP is security. For example, a rogue DHCP server could cause a lot of issues within the network as the network staff does not have any control over the server.

The automation through which DHCP works makes the job much easier for the network administrator, but could pose a serious problem when nobody is controlling it. Any user that connects to the rogue DHCP will face a risk of the information sent over being exposed, which violates both network security and the privacy of a user.

Furthermore, the DHCP server in general does not have a secure mechanism in place to protect from unauthenticated clients. If an unauthorized client enters the network, the whole network could be at risk.

Having only one DHCP server in place can cause trouble within the network. Any failure that happens in the server leads to a big problem in the whole system. For instance, any device that hasn’t yet obtained an IP address will not be able to do that.

In addition, devices with an assigned IP address won’t be able to renew it and could lose the existing IP address. Nobody would be allowed to access the network until the server restores. That would lead to a loss of communication within the network.

Moreover, one DHCP server will not be enough for a network with various segments or subnets. The network administrator would have to perform additional setups which could cost more and not be as time-effective. That could lead to even more problems with the network. Thus, having just one DHCP server is not the best idea for larger, more complicated networks.

The Dynamic Host Configuration Protocol is extremely useful to have enabled on your network. It has many upsides and will make the network administrator’s job much easier. However, it does come with a few major disadvantages that could cause serious issues within the whole system. According to experts, the benefits do outweigh the downsides, which is why they recommend that all users keep DHCP enabled on their networks.