There are few things more frustrating than having to deal with bad internet speeds. You’ll have to wait longer for sites to load and those few seconds tend to add up and waste valuable time. This is especially true in a business setting when each small is also an additional expense.

One of the ways to make sure that you’re getting good and reliable speeds is to use an Ethernet cable since it will always be a faster option than the wireless internet connection. However, this poses a question: “will the use of an Ethernet cable affect the Wi-Fi speed”?

The simplest answer is no. Using an Ethernet cable won’t affect the speed of the Wi-Fi used at the same time. However, there are few caveats to this, that need to be addressed as well. Sometimes, your internet activity can cause the internet speeds, in general, to be slower and this will affect both the Ethernet and wireless connection.

This is what happens when you’re using too many devices (more than five) at once, or when you’re streaming large HD videos or downloading huge files. This isn’t due to the use of an Ethernet cable, but due to how it’s being used.

Ethernet is a way to connect computers to the internet. It’s sometimes also called Local Area Network (LAN). The physical connection between computers and other devices is used for them to share data. It’s invented in 1980 or at least that’s when it was released to the broader public.

Ethernet cables are used to connect the devices, and they are found both on a computer and on a variety of other devices such as TVs, routers, and many others. They provide a fast internet a reliable connection, that won’t break.

Limitations of an Ethernet Cable?

As is the case with any other device, an Ethernet cable has some limitations that need to be taken into account as well. The most important of these is about how long the Ethernet cable can be, without the internet signal losing its power.

Ethernet cables vary in size based on their type. A Cat5 cable can be up to 324 feet long, and a Cat6 can be up to 700 feet long. The longer the cable gets the slower the internet will become. These lengths are increased now since the cables use a better form of copper and superior foil tape. 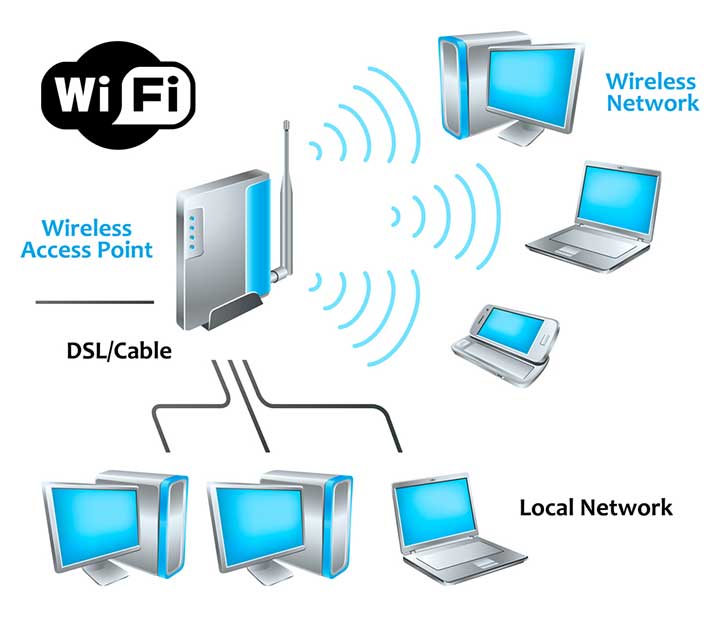 They use radio waves to connect the devices, and that’s how the devices communicate with each other. This also makes them vulnerable to hacking and leaves data exposed to those who want to access it. It’s especially true when you’re connecting to a public Wi-Fi source.

What Can Cause a Lag?

As we said, using an Ethernet cable won’t slow down the Wi-Fi on its own. It depends on how the internet is used and are you taking on too much data at once and thus slowing your connection. Here are a few cases in which that can happen:

Is Gaming Going to Cause a Lag?

Using an Ethernet cable to connect to the internet and play online games is the best way to go. The amount of lag you may get when you game, mostly depends on how good your internet provider is and how far away from the game server you are.

It’s also possible to game online using a Wi-Fi connection but when you notice that the lag is becoming too much of a burden it may be best to switch to the cable. Others, using a wireless connection, in your household, shouldn’t experience a lag while you play.

Streaming a game can be done both via Wi-Fi and via an Ethernet cable. However, you may not be able to achieve the same video quality with both. If you want to keep using Wi-Fi, it may be better to lower the video quality so that your router speeds can handle it.

When the lag becomes too much, again, you should switch to the cable. Even an inexpensive Ethernet cable can be better than using Wi-Fi. That’s why it may be a good idea to always have an Ethernet cable going from your main computer to the game room. It will allow you to switch between the two when needed.

What Kind of Speeds to Look for?

For most households, it’s best to stick to speeds somewhere between 100 and 200 MBps.  That will be enough for day to day activities of 2 to 5 internet users at a time. Things are a bit more complicated when it comes to wireless speeds. They will be as much as 50 percent lower than those you get using an Ethernet cable.

When you plan to use steam videos in 4K or send and receive large files, you may need more than 200 MBps.

To Sum Things Up

To quickly summarize what you need to know: your Wi-Fi speeds won’t be affected by the use of Ethernet cables. The two are not connected since they use separate devices and modes of connecting to the internet.

When your connection as a whole is overburdened, it may cause the connection to become slower on both the Ethernet and Wi-Fi connection. That’s what happens when you stream an HD video or download very large files.  Those are metrics to take into account when choosing an internet speed from your provider.