If you browse the internet looking for the answer, what type of connection is better – Ethernet or Wi-Fi? The answers might easily confuse you. That is perfectly understandable since most people will present their opinions formed under their specific needs and requirements. For example, bloggers, gamers, streamers, and virtual assistants will have different expectations and tolerances regarding internet speed, latency, and reliability.

To be honest, Wi-Fi will probably never reach the same speeds as Ethernet outside the laboratories and a few perfect situations. Let’s see how they both work and which option works better for specific applications. 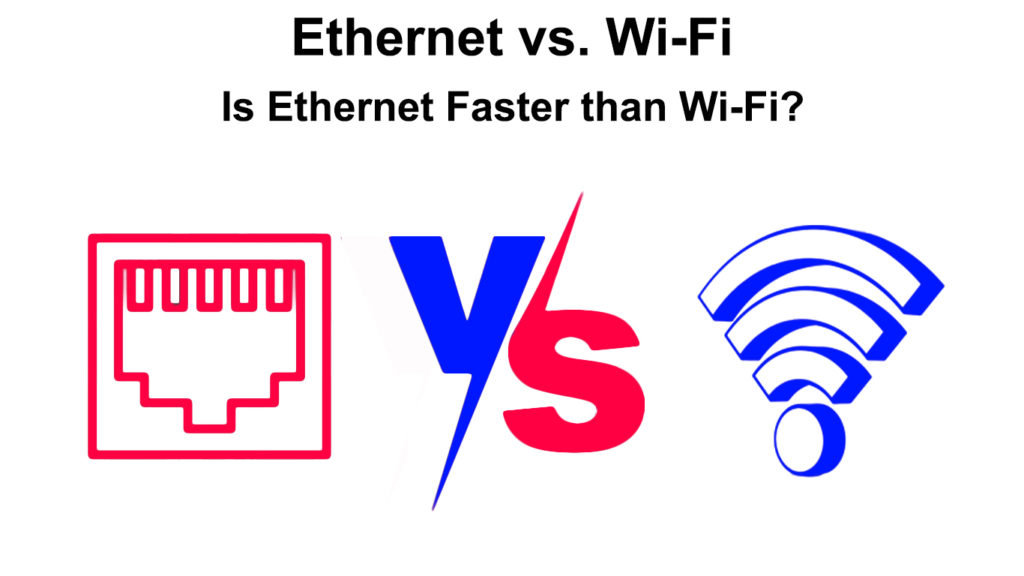 Ethernet VS Wi-Fi – How Do They Work?

The Ethernet connection works by connecting two devices using a set of wires (Ethernet cables) where the signal travels as electrons from one end to the other. On the other hand, Wi-Fi uses EM (electromagnetic) waves that travel through the air between the transmitter and the receiver.

Paradoxically, EM waves travel faster than the electrons in the wire, yet somehow Ethernet works faster than Wi-Fi. How is that possible? Well, there are a couple of reasons for that.

Firstly, the Ethernet signal travels through the well-isolated wire, meaning there is far less interference and signal degradation over range. Ethernet cables can easily reach over 100 yards before the signal degrades below the useful threshold.  On the other hand, Wi-Fi can’t reach that far, especially inside the buildings.

Most home Wi-Fi routers still shoot the radio waves in all directions, meaning they have to penetrate walls, and floors and get through interference from other EM-emitting devices like microwaves and other routers every time they need to transfer data to and from your device.

Secondly, the Ethernet cable is full-duplex. This means that data can travel in both directions simultaneously. It has separate wires for sending and receiving data which is fairly simple to design and achieve. Wi-Fi, on the other hand, looks very outdated in that regard. Up until recently and the introduction of Wi-Fi 5 and Wi-Fi 6 standards, which we will talk about in a bit, Wi-Fi was half-duplex.

Half-duplex means the router can only send or receive data at a time. Not only that, but they were able to service only one user at a time. In other words, if there is more than one connected device, the Wi-Fi router will receive data from one user, then send it to that user, then receive the data from the second user and send a reply, and so on.

As you can imagine, this limitation can significantly slow down traffic and degrade the user experience. Most of these Wi-Fi quarks are mitigated or resolved in the latest versions, but routers that implement them and other devices that support those standards are still far from being in every home.

Lastly, there is data packet loss. Ethernet and Wi-Fi have very different approaches when it comes to resolving this problem. Data packages are usually lost when two or more devices send the data simultaneously, resulting in a clash on the router’s side. When this happens, lost data packages need to be resent.

Ethernet listens for the signal that the path is clear and sends data as soon as it receives it to avoid collisions and package losses. On the other hand, Wi-Fi sends data with a slight delay, resulting in higher latency and significantly worse speed results.

Everything you read to this point applies to the majority of users who are still using routers up to and including Wi-Fi 4 (802.11n) standards. Wi-Fi 5, Wi-Fi 6, and the newest, Wi-Fi 6e, offer some jaw-dropping features and much greater speeds, allowing them to compete, toe to toe, with the Ethernet. Let’s check the Wi-Fi standards from Wi-Fi 4 to the newest one and see what they have to offer.

Wi-Fi 4 (802.11n) was introduced back in 2008, and it supports dual bands (2.4 and 5 GHz) and offers a maximum link rate (connection speed) of 72 to 600 Mbps. This standard was the first to standardize MIMO (Multiple Input – Multiple Output) features, allowing more than one request at a time, but you won’t find many routers where these features were fully implemented. Most of the routers we received from our ISPs were Wi-Fi 4.

Wi-Fi 5 (802.11ac) was introduced in 2014. It brings the set of protocols to allow WLANs on a 5 GHz network. Top speeds were increased to 433 – 6933 Mbps per link. This standard also improved MIMO to 8 simultaneous requests and allowed service to more than one user at a time.

The Evolution of Wi-Fi Standards

If you look at the raw numbers, Wi-Fi looks like more than a match for Ethernet in most aspects, but you have to keep in mind that all those limitations and downsides we described above still apply to some degree.

The Ethernet (IEEE 802.3) also comes in various flavors, ranging from 100 Mbps, 1 Gbps, 2.5 Gbps, 5 Gbps to 10 Gbps, depending on your equipment and the type of Ethernet cable you’re using to connect different devices.

10 Mbps and 100 Mbps Ethernet adapters, switches, routers, and cables are considered obsolete, but you will still find many devices that use 100 Mbps connection since the technology is backward compatible. However, anyone thinking about creating a LAN (Local Area Network) based on the Ethernet standards shouldn’t go below 1 Gbps, even in strictly residential applications.

Furthermore, you should use at least Cat 5a or Cat 6 cables between the devices for future-proofing since they allow speeds up to 10 Gbps.

To learn more about the Ethernet, check the video below:

Now let’s see what the upsides of using each of these technologies are:

A dedicated copper pipeline offers better reliability than shooting radio waves through the air. Ethernet cables are made of twisted pairs of copper wires and shielded from any interference.

If you compare the standards side by side, Ethernet will always offer more bucks for the money since it is less complicated and more affordable for the same or better performance.

Since there is no delay between having a clear path and sending data down that path, Ethernet will always have slightly better performance regarding latency, but not by a great margin. Still, if the latency plays a great role in your requirements, this fact is worth considering when choosing one over the other.

This is another category where Ethernet has a clear advantage over Wi-Fi. It is much more difficult to tap into a hard wire than to pick up a signal sent over the air.

Wi-Fi is unquestionably more convenient to set up and use. All it takes is a few cables and one or two devices, and you can provide service to dozens, if not hundreds, of different devices and users. Keeping in mind that Ethernet needs a separate cable for every device, it is not hard to realize how much more convenience Wi-Fi offers.

It is faster and easier to upgrade your Wi-Fi network and have it up and running than with Ethernet. Furthermore, you can use Wi-Fi anywhere within signal range while you are limited with cable length and ethernet plugs when you’re using the ethernet.

All this comparison doesn’t mean much unless put in a real-world scenario. So, let’s see how both Wi-Fi and Ethernet do in some common use scenarios.

Gaming is all about constant internet speed and low latency, especially if you’re playing some MMO game. Constant speed is needed to have smooth gameplay without glitches and freezing on the screen, while low latency allows you to react in time to threats and other changes in the game.

Since Ethernet handles both of these categories, it is a better option whenever possible to use.

Whether you are streaming a video to your device from Youtube or streaming your camera feed to some internet service like Twitch, you will need a stable, reliable connection. Latency doesn’t play a significant role here, but stability and speed do. Another category where ethernet takes a point over Wi-Fi

Ethernet VS Wi-Fi: Work from Home

Now, this depends on the type of work, but for most applications, convenience and flexibility will take the advantage over other aspects. Being able to carry different devices around the home and stay connected without worrying about the cables can have clear advantages. So, we will give a point to Wi-Fi for this application.

It all comes down to your priorities. If you’re chasing top performance, better security, and reliability and don’t mind running dozens of cables across the building, you should go for Ethernet.

On the other hand, if you are pleased with adequate, somewhat slower, and less secure, but far more convenient and flexible means to set up your LAN, Wi-Fi is a way to go.

In the end, keep in mind that neither can increase your internet speed above what you are paying to your ISP (Internet Service Provider) and that they only serve to deliver data from the modem or the router to your devices as fast as possible.