The Federal Bureau of Investigations, also known as the FBI, is the USA’s national intelligence and investigation agency. The agency carries out investigations, surveillance, and monitors local and global networks to prevent crime on US soil.

Therefore, the FBI will take the necessary measures to curb terrorism, cyber-crime, and other grievous crimes. Their mandate is to keep all citizens safe and fight crime by arresting law-breakers.

The FBI will keep all operations private to avoid detection, especially during surveillance. So, is the FBI surveillance van Wi-Fi a hoax? Let us find out. 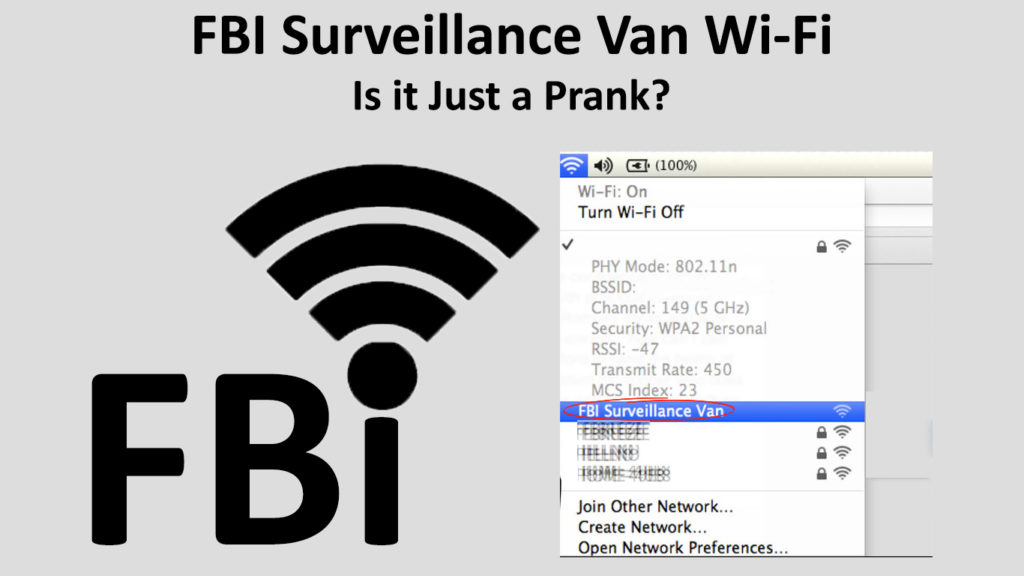 Is the FBI Surveillance van Wi-Fi Real or Fake?

It is common to find a network SSID broadcasting as “FBI Surveillance Van” when you are connecting to Wi-Fi?

The name is enough to make one wonder if the FBI is really conducting surveillance within your radius.

It is very uncommon for an organization that works covertly to broadcast its presence in such a way. You can believe, without a doubt, that network does not belong to the FBI.

Additionally, it is easy to confuse real life with fiction in movies, and some people can believe that there is an FBI van in the vicinity.

Unlike in the movies, the FBI does not sit outside in a white van scoping out criminals. They certainly have discreet ways that are less noticeable than a van.

Also, it would make sense for the FBI to use the simple feature of hiding their SSID instead of announcing their presence.

Wi-Fi connections are not very secure for the FBI to broadcast. Assuming it was a real surveillance van broadcasting Wi-Fi would be a weak point that many hackers would have loved to exploit.

Indeed, the investigation agency has put measures to ensure no one ever gets into their systems, but that does not mean they are impenetrable.

Days before his arrest, he had a post on Facebook saying how he saw a network with the name “FBI_SURVEILLANCE_VAN.” He was later found guilty of attempting to bomb his high school and commit murder.

Many people found the name fascinating and would later give their networks such a name or its variation. However, some bought into the rumor and think the FBI’s surveillance is what led to Jared’s arrest.

However, there was no confirmation that the FBI had anything to do with the tip-off on Jared.

So, Why Is There an FBI Surveillance van Wi-Fi Broadcast?

The simplest and most direct answer is because why not? The FBI surveillance van SSID has been a harmless running joke for years. It could also be a prank to freak out paranoid people.

The bottom line is that any wireless broadcast named FBI Surveillance van should be taken as a joke.

Alternatively, it could be a futile attempt to stop others from using a particular wireless network by instilling fear.

Is it Right to Name My Wi-Fi FBI Surveillance Van?

From a moral standpoint, it could be wrong because the FBI is an agency that ensures safety and saves lives. Also, such SSIDs could trigger people with mental disorders such as schizophrenia, which might be the beginning of a chain of unfortunate events. If the idea strikes you to name your network as such, be aware of your environment and consider all possible outcomes.

However, it could be a simple joke that people enjoy, and we should not take it so seriously. As long as no one is hurt in the process, there is no problem with the SSID.

In terms of legality, there are no laws governing what one should name their wireless network. Although, it is vital to ensure such elaborate plans do not infringe on other people’s rights.

What to Do When You See FBI Surveillance van Wi-Fi?

It is advisable to avoid any such network with the SSID name FBI Surveillance van Wi-Fi. Many people use it as a joke or prank, but others might use it for malicious reasons.

Therefore, it is best to acknowledge, chuckle, and move on when you notice such names.

Unfortunately, some people might use this and other SSIDs as phishing tools to attract unsuspecting users and acquire their data. Hence when you connect to the network, they will obtain your details, including emails, passwords, and bank account information.

Thus, the hackers will hack into your accounts and steal money or blackmail you. Thereby doing the exact opposite of what you would expect the FBI to do.

As a general rule, avoid public networks unless you have to use them, as you never know who is creeping.

You do not need to panic unless you are a criminal on the run. However, the FBI announcing their presence would beat the whole investigation aspect in their mandate.

What Do the FBI Surveillance Teams Use?

There is no definite answer concerning the FBI using surveillance vans and other investigation techniques. The FBI is very versatile during their investigations, and they might even hide in plain sight without anyone noticing.

The most common tracking methods include cellphone triangulation, where a cellphone’s last location is identified depending on where it last pinged.

FBI surveillance teams can also track your online activity by following your location through modern cars that use GPS.

Therefore, if the FBI is tracking you, they will take very prudent measures to avoid attention from the public. It is important to note that their techniques take several months to gather enough evidence against a suspect.

They will blend in and use common network names to attract people to the web if that was their intention.

Also, there are laws governing such activities, meaning once someone is under surveillance by the FBI, their case is pretty much sealed.

We may never completely understand how the FBI works in real-time when carrying out investigations. They might as well use the surveillance vans, but we will never find out for sure.

Working and moving without any announcement is how the FBI operates to build on criminal cases. Whether they do it on foot or through vehicles, they will find a way to obtain the necessary information.

The next time you see an FBI surveillance van SSID remember it is highly likely it has no relation to the FBI. On the other hand, you could always test your creativity by coming up with Wi-Fi names that put a smile on strangers’ faces.

1 thought on “FBI Surveillance van Wi-Fi (Is It Just a Prank?)”