You know it’s time for a network upgrade when you find yourself sitting in your room, trying to surf the internet, but you’re getting a very bad signal, and the connection keeps dropping. It’s tricky to choose what to upgrade to.

From you being here and reading this article, we can assume that you’ve decided to go the mesh wireless network way. That’s why we’re going to talk about Google Wi-Fi vs. Netgear Orbi, and you can see which is a better fit for you. 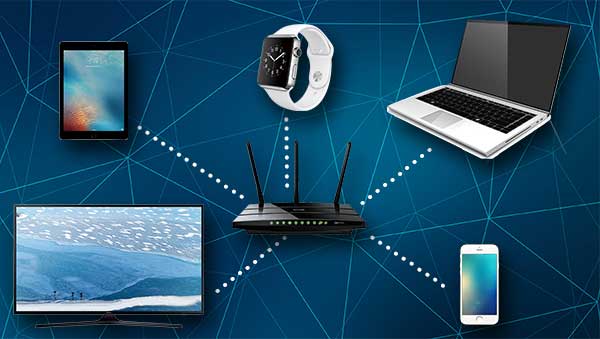 When you look at regular networks, there’s always some kind of order, a network hierarchy of the routes the data is taking. First, it’s your device, then it goes to the router then it goes to another device in your network if it’s local networking.

A regular wireless router establishes a WLAN (Wireless Local Area Network). Because of this network, the devices in your home can communicate with each other wirelessly, but they do not communicate directly.

For example, when you send something from your laptop to your brother’s laptop, the metadata goes through the router so it decides where to send the data, and from where to take it. The router is the main part of this network.

Difference Between Mesh and Wi-Fi Extenders

Now, when you want to have an equally strong wireless signal in every corner of your home, you need either buy an entirely new mesh system, or you need to do a little network boosting with extenders, multiple routers, boosters, etc.

By adding routers to make the connection better, you need to turn off the NAT(Network Address Translation) feature to make the router a bridge for the connection to the main router. It’s complicated because you’ve added another device to the network hierarchy, another level.

It’s more or less the same for Wi-Fi extenders, by installing an extender, your laptop needs to connect to the extender which then connects to the main router in your home. The connection can be good, but it can’t beat a mesh Wi-Fi network.

Mesh networks are different because there are several nodes inside the network that communicate with as many other nodes as possible. Picture this, there’s one node in the bedroom upstairs, one in the basement, and the main router is in the living room.

The Google Wi-Fi mesh system has two interesting specs. The first one is that it can support a connection of 100 devices. The second one is that you can have 4K steaming in multiple rooms in your home with no sketchy connection.

It’s a standard dual-band mesh Wi-Fi system that supports 2.4 GHz (Gigahertz) and 5 GHz frequency bands with the latest IEEE (Institute of Electrical and Electronics Engineers) standards. It comes in the color of snow.

With Google Wi-Fi, the maximum possible connection speed you could probably get is 1.2 Gbps (Gigabits Per Second). You can connect two ethernet cables per one Google Wi-Fi point, and by connecting multiple points you can have 4500 sq ft coverage.

At the moment, Netgear is going out of its way to gain a competitive edge in the market. In our opinion, they already have, and you have the Netgear Orbi Quad-band Wi-Fi 6E mesh system to testify to that.

The router and the satellite have 4 ethernet ports, but one is a 2.5 Gigabit Ethernet port. The wireless connection from Netgear Orbi can cover up to 9000 sq ft, and it offers a combined speed of 10.8 Gbps on your Wi-Fi. 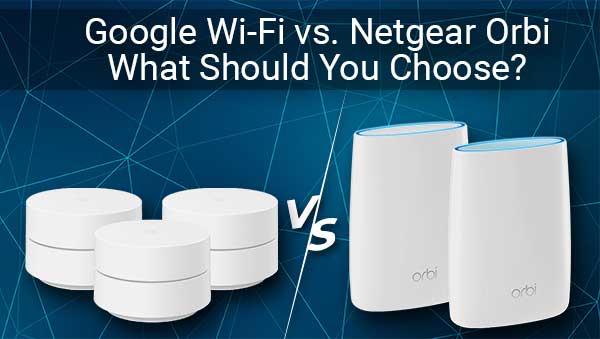 Up till now, we could see that both Google Wi-Fi and Netgear Orbi are good depending on the needs of the user. From the overview, it’s easy to get the picture that Netgear Orbi might be better, but both have their pros and cons. Here’s a simple comparison:

To sum up the Google Wi-Fi vs. Netgear Orbi comparison, it’s nowhere near a tie. The newest Netgear Orbi mesh Wi-Fi system is possibly one of the best-performing systems for commercial use.

However, the price is hefty and unless you live in a mansion with numerous other family members that need to stream 4K movies and use the internet constantly, we recommend going with the more affordable Google Wi-Fi mesh network system.