The short answer is – YES. Someone can definitely hack into your phone over Wi-Fi. And not only Wi-Fi but also through any other connection to the internet you might use. Chances are, your phone came to you already hacked from the factory. Don’t think you are paranoid.

Phone hacking is as real as you and me. And it makes sense when you think about it. Mobile phones are warehouses of personal, sensitive, and confidential information about every individual that owns and uses one. On top of that, every phone has a microphone and camera that someone who knows how can turn into spying equipment.

If you want to get some general information on how they do it, how you can know if you’ve been hacked, and how to minimize the chances of being hacked, read this article to the end. 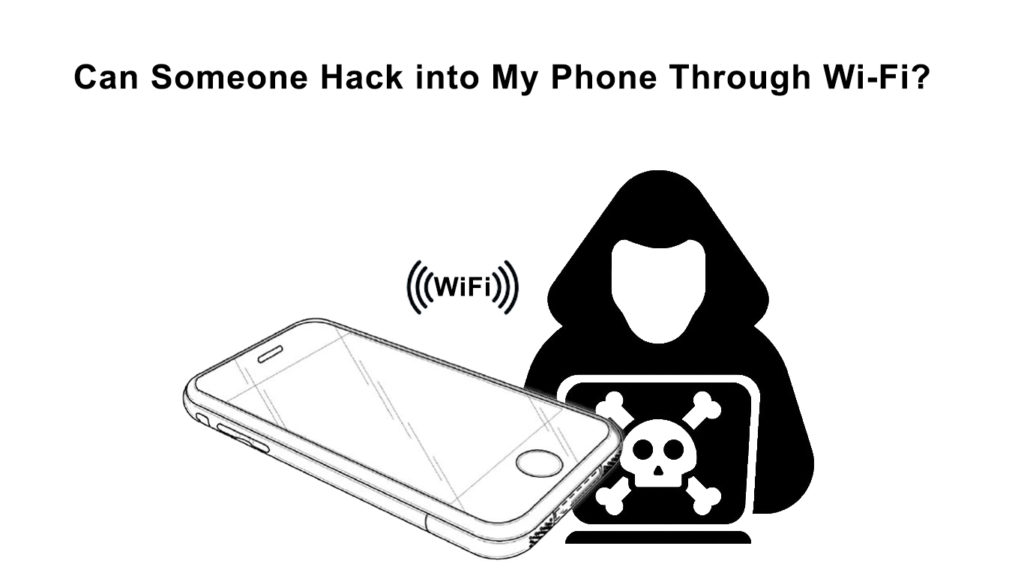 To hack a phone through Wi-Fi or other means (mobile data, for example), a hacker needs to install malware on your phone. Malware is short for malicious software, specifically designed to do damage or allow unauthorized access.

It can be preinstalled by the manufacturer, serving as a back door for them or their government agencies, or installed by the user, tricked into believing it is some harmless app. In some cases, a hacker can exploit security vulnerabilities of the operating system or widely used apps to install and run malware on the user’s computer.

How Easy It Is to Hack into a Phone

iOS malware definitely exists, but there is no way to scan for them since apps don’t have permission to scan the system. Antivirus software for iOS is simply not possible. That being said, Israeli-made Pegasus spyware is perfectly capable of infecting, monitoring, and sending information to its servers from iPhones and other devices running iOS up to version 14.6. Pegasus can read your texts, listen to your calls, steal passwords app information, turn on the mic and camera, and track your location. There is other malware usable for iOS, but Pegasus is one of the most invasive ones.

What is Pegasus Spyware

Phones running Android can become infected out of the box. It is well known and published that both USA and China-made mobile phones shipped to the customers with preinstalled malware designed to collect and send user information to a remote server. In both cases, the government and their agencies were the ones who made this, but who can say a private company can’t covertly do the same?

Things are similar even without government influence. There is a ton of malware lurking everywhere, tons of scams designed to trick the user into installing the app and allowing the hacker unlimited access to sensitive data.

None of those attacks are Wi-Fi specific, and they can happen whenever you turn on your phone or go online. However, there is one hacker attack quite common to Wi-Fi networks.

Whenever you connect to an open network and don’t use VPN, there is a good chance you can become a victim of a hacker attack called Man in The Middle or MITM for short. With this attack, the hacker won’t have to figure out a way to install malware to your device, and he will “simply” pretend to be a router and collect all the data you send or receive on your phone.

So, how does that work?

Many users don’t pay much attention to their network security and leave default administrator credentials on their routers. Hackers use those credentials to find out the MAC address of the router as well as other settings. Now, when the hacker knows the router’s MAC address, he assigns it to his specially tweaked device.

Since the MAC address should be unique, every connected device on that network will see the hacker’s router as the real one. He will now have access to all the data you are sending and receiving and go through it while passing it on to the actual router. Hence the name “Man in the middle.” Hacker is effectively standing between your phone and the actual router.

How to Know You’ve Been Hacked

There are a few tell-tell signs that you’ve been hacked. It is easier to find this out on your own network since you have administrator credentials. In that case, you can check the Wi-Fi status in the router’s control panel to see whether or not there is some unknown device connected, and if there is, you can kick it out of the network, disconnect the router and change both administrator and SSID passwords.

Other than that, symptoms may be the same or similar to computer malware infections:

How to Minimize Risks of Being Hacked

Be very careful when choosing your next mobile device unless you’re ok with big companies and governments spying on you for “your own good.”

When you’re installing software on your device, use trusted sources and read reviews from other users before you download and install something you’ll regret moments later.

Use VPN software or a browser with built-in VPN features when using the internet outside of your home network.

On your home network, make sure to change the router’s default username and password to make it harder for the hackers to crack.

Someone can hack your phone using Wi-Fi or any other connection to the internet. Chances are – your smartphone came to you hacked from the factory. Manufacturers install malware on their phones under the supervision of their government agencies or on their own to collect any useful information about the users. However, when we talk about Wi-Fi-specific attacks, the most common one is MITM or Man in The Middle.

Hackers will find a poorly protected router and copy its MAC address, fooling all the other devices on the network to think a hacker is a real router. Then, he will receive all the incoming traffic to find passwords, credit card information, and other valuable data before passing it on to the actual router.

You can tell you are hacked if your passwords change or if you notice any other common computer virus infection or data breach symptom. Those can vary from sluggish operations to website redirection or ransomware messages.

To be as safe as possible, make sure your home Wi-Fi network is well protected, carefully choose the make and model of your phone, don’t install apps from untrusted sources.

As a security imperative – use VPN software whenever you are connecting to public Wi-Fi.