Internet connectivity options are very limited for many people outside urban areas and developed telecommunications infrastructures. The further you get from cities and towns, the fewer options remain available. The only option available pretty much anywhere in the world is satellite internet.

Since it doesn’t rely on cables and cellphone towers, it can be used anywhere where you can provide sufficient power for all of the devices and a clear line of sight between the dish and the sky.

However, even with the unpaired availability, satellite internet comes with certain limitations regarding maximum speed and, even more important, latency. Fortunately, since Elon Musk started investing resources to improve the technology and overcome its shortcomings, there is a very compelling alternative to the legacy satellite internet providers, with more competition on the horizon.

Before we dive a little deeper into the differences and best choices between different satellite internet providers, let’s explain how it all works. 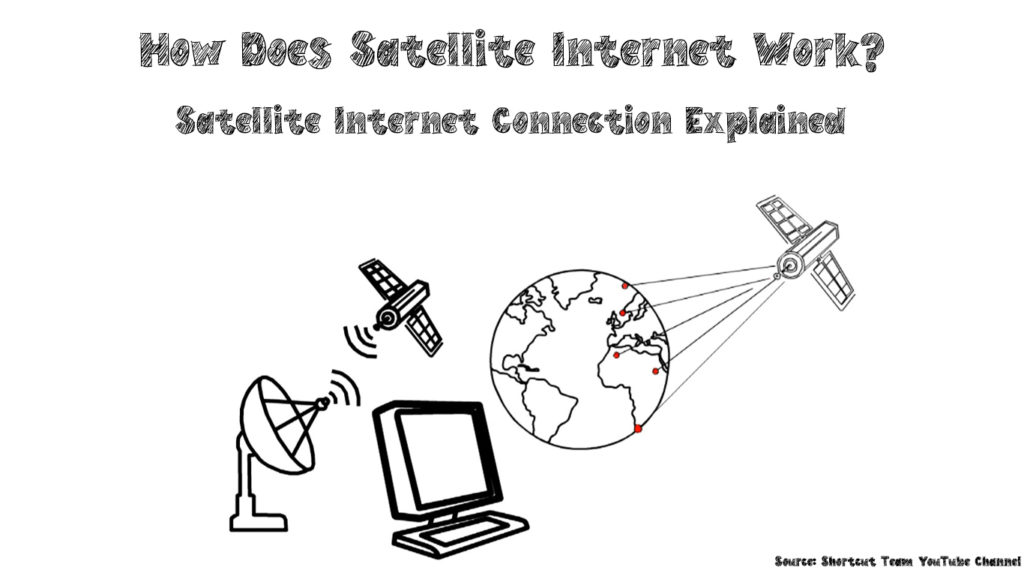 So, How Does Satellite Internet Work?

A network operations center or NOC is a ground station connected to the internet backbone using a high-speed fiber-optic line. NOC is equipped with large and strong antennas that shoot the internet data using radio waves up towards the satellite orbiting the Earth. They also receive data from the satellite and pass it through the rest of the internet.

Satellites are man-made objects launched by the rockets and placed in an orbit above the planet. Traditionally, satellites used for the internet and TV broadcasts are placed above the equator and act as a mirror. In other words, they reflect the signal from the ground station to the user and vice versa.

Satellite service providers use geostationary satellites in orbit 22 500 miles above the surface, where they travel in sync with the planet’s rotation. That way, they are always in the same position relative to any point on Earth, making them much easier to find and aim with the signal from the ground.

Positioning the satellites so high above the Earth allows the satellite to cover a much wider area. The downsides of such satellite positionings are speed limits and significant addition to latency since it takes some time for the radio waves to reach so high, bounce back down, and do it all over again every time you request some data from the internet.

A satellite dish is the first component on the user’s side of the system. It serves multiple functions. The dish itself focuses the signal coming from the satellite to the receiver, where it’s being picked up and sent through the cable to the modem/router inside the house. Precise positioning toward the satellite and a clear line of sight is imperative for the proper functioning of the entire system.

The last component in the system provided by the satellite internet service provider is the router. It is similar to modems used for cable internet or DSL. Modems are used to modulate and demodulate signals. You see, the signal you are sending to the satellite and receiving from the above is analog, and it needs to be digitalized before your computer can understand it.

In some cases, you will get one modem/router combo unit. In other cases, they will come separately. The router allows you to connect multiple devices simultaneously via an Ethernet cable or Wi-Fi.

Finally, the last component is:

Computer with a Network Adapter

It can be a PC, Mac, or mobile phone as long as it can connect to the router using an Ethernet cable or Wi-Fi.

How Does Satellite Internet Work – Explained in Three Minutes

What Can You Expect from the Traditional Satellite Internet?

This question is not as simple as it may look. Firstly, we have to consider that there are two types of satellite internet. The first type is represented by traditional satellite internet service providers that use geostationary satellites high above the equator. The second type is a new wave of ISPs led by Elon Musk’s Starlink utilizing thousands of small, fast-moving satellites in a low orbit.

Let’s explore the features of traditional satellite internet service first and leave the newcomer for the end.

Both of these ISPs offer various internet plans and speeds up to 100 Mbps. However, there is a catch. Every plan has a high-speed data cap, and when you go over the cap, your internet speed drops significantly under the broadband limit (below 25 Mbps). In this day and age, you need at least 25 Mbps to comfortably use all services on multiple devices, especially when streaming videos from any platform. Anything below this threshold will require some level of prioritization and sacrifices, meaning you won’t be able to stream on more than one device at once comfortably.

Thirdly, traditional internet has major latency issues. Every time you enter a URL into the browser or click on a link, your computer sends a request for a file of that page to be loaded into your computer, your request needs to reach the space, go back to earth, and reach a remote server where that page is saved. Then reply from that server needs to travel back the same way.

That takes around half of a second. That time may not be very noticeable when you are loading a single, large file such as a video, but it will be a game-breaker when many requests need to go back and forth because the lag for each request adds up. For example, you will be able to watch a long video with no issues, but video calls will be a nightmare or not even possible at all.

Lastly, there is a reliability problem. Satellite internet will work just fine most of the days, but heavy rain or snow may slow it down dramatically or break the connection until the weather clears.

As you can see, while traditional satellite internet might be your only solution for being online, it comes with some serious limitations and issues. You will be able to exchange e-mails and be active on most social media. But, if you want or need a full array of internet services, you will find it somewhat lacking. Still, some technological advances are showing a lot of promise.

Starlink and other next-generation satellite internet providers overcome most of these limitations and issues.

Starlink and the Next Generation Satellite Internet

On top of having so many satellites in a low orbit, they are designed to constantly communicate with each other, allowing data flow even when most of the satellites are not in the optimal position.

Average speeds are much higher, both download and upload since the load is divided among many satellites. Lastly, reliability is much higher due to the low orbit and advanced receivers.

Receivers are the key component in this system since they are quite advanced in comparison to traditional satellite systems. Starlink receiver has a phased array antenna. Hundreds of small antennas are next to each other across the surface of the dish. By shifting the phase of each antenna, the Starlink dish changes the direction of the signal to catch the satellite as it moves above.

However, all those features come at a price. Since April 2022, Starlink equipment will cost you 599 USD + shipping, and your monthly service charge is around $110.

Recently, Starlink offered a special subscription for campers and travelers that allows you to pause the subscription and resume it when you need.

Starlink might be ahead of the pack and a pioneer of next-generation satellite internet, but it’s far from being the only competitor. Two major companies are joining the race for global coverage and users with limited internet options.

Amazon is also in the race for next-generation satellite internet. The company plans to launch its own constellation of 3,236 low-orbit satellites and offer fast, affordable broadband internet for the underserved population around the globe. The Kuiper project is still in development at this point, but the rocket launches for the satellites are already booked.

Once operational, they plan to offer up to 400 Mbps and low-latency connections.

OneWeb is another competitor with a similar idea. The company is owned by the UK government and other investors. Their plan is to launch more than 600 low-orbit satellites on a 1200 KM orbit for global coverage.

Satellite internet has two operational concepts to connect users with the rest of the network.

Next-generation satellite internet providers use large constellations of low orbit satellites, thus reducing latency and increasing speeds. The rest of the system is pretty much the same.

You need a modem and a dish to send the signal using radio waves to the satellite. The satellite then forwards your request to the ground station that is connected to the rest of the internet. When a request arrives at the server that holds the data you want, data goes the other way to the ground station, a satellite, the receiver on the dish, the modem, and finally, your computer.