Smartphones and other Wi-Fi-enabled devices have tons of built-in features to make it easy to perform various tasks. The home screen, particularly on a cell phone, may not have enough space to put in everything, but you can find more features in the background, mainly in the device Settings.

A classic example is Wi-Fi Direct, hidden somewhere in the Settings. It’s a handy feature sitting on most devices today (except Apple devices, which re-branded it to AirDrop), but did you know how to use Wi-Fi direct? 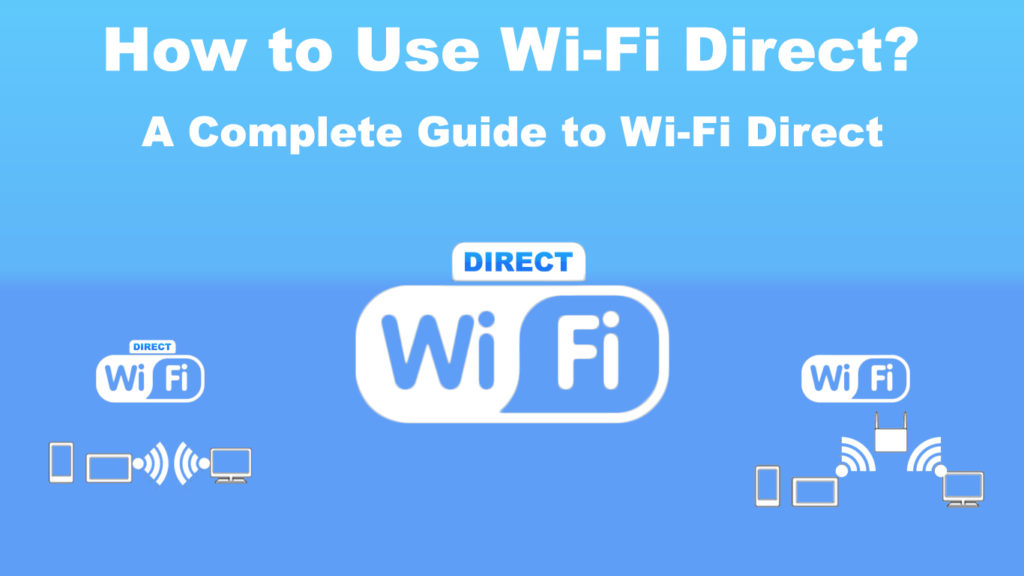 Wi-Fi Direct is a useful feature that makes it possible for Wi-Fi-enabled devices to communicate with each other. In addition, it can perform multiple tasks such as sharing files, syncing, printing, displaying content, and many more. All these can be done without the need to connect to Wi-Fi.

Smartphones and other Wi-Fi devices generate their Wi-Fi networks in the absence of an actual internet connection. They can connect to other devices that support the same Wi-Fi Direct feature, usually to just one device at a time. You can share files, transfer content, and play games across devices with this setup. One-to-one device connection is common, but you can also connect a group of devices simultaneously.

An additional benefit of using Wi-Fi Direct is that you can connect devices wherever you go, which is not the case with a classic Wi-Fi connection. Wi-Fi Direct works by emitting a signal to nearby devices, signaling it’s ready to make a connection.

Since its creation in 2010, Wi-Fi Direct has been greatly supported by tons of devices such as smartphones, laptops, tablets, TVs, printers, and cameras. For that matter, all Android devices have a built-in Wi-Fi Direct feature, starting with Android 4.0 onwards. However, Apple devices have their own version of Wi-Fi Direct in the form of AirDrop, which, understandably, only works within the Apple ecosystem.

How to Use the AirDrop Feature? (iPhones and iPads)

Some might wonder why we need Wi-Fi Direct when we already have Bluetooth that works the same way. The answer is Wi-Fi Direct transfers way faster than Bluetooth, and it also works at longer distances. Therefore, it gives a better choice, especially when the speed has become the foremost important measure of everything in the current IT environment.

There are many ways you can take advantage of Wi-Fi Direct valuable features. Here are some of them:

A few years back, we used to share files between devices using Bluetooth or a wired connection. Bluetooth can still work, but as mentioned earlier, it takes a lot longer to transfer, especially when the file is big. On the other hand, transferring files via cable is faster but cumbersome. After all, it looks primitive. Wi-Fi Direct fixes the issue with its simple and lightning file transfer.

Modern printers usually have online facilities, and they support Wi-Fi Direct. You can set them to communicate with other devices and send printing instructions wirelessly from those devices.

You can also use Wi-Fi Direct for online gaming via the adjacent Wi-Fi devices. This way, users can play multiplayer online games without going online. Wi-Fi Direct can also allow wireless screen-sharing between multiple devices with no internet.

Follow these steps to set up Wi-Fi Direct on your device:

How to Send Files

Q: How does Wi-Fi Alliance certify a Wi-Fi Direct Product?

A: Wi-Fi Alliance, being the governing body, do specific tests on the products to ensure users get the best experience with the certified products.

Q: How does Miracast associate with Wi-Fi Direct?

A: Miracast uses Wi-Fi Direct technology to allow screen-sharing between the source device and display devices without the need to connect them to the internet.

Q: How does the Wi-Fi Direct certification program work?

Q: How far a Wi-Fi Direct connection can travel?

A:  Devices using Wi-Fi Direct can connect to nearby devices and devices located further out, up to 600 feet away.

A: How fast Wi-Fi Direct travels depends much on the Wi-Fi Direct devices. Generally, it can support speeds of up to 250 Mbps.

A: Yes, but not all Wi-Fi Direct devices support both bands.

You may not be familiar with Wi-Fi Direct, even though it’s a common built-in feature in most devices. If you have read everything here, you would have already known how to use Wi-Fi Direct.

So, the next time you want to transfer a file from one device to another, easily and quickly, use Wi-Fi Direct. After all, you don’t have to connect your devices to the internet to accomplish the transfer, which makes it at least a great backup option when you don’t have access to Wi-Fi.