The good-old saying ‘’less is more’’ can be applied to many things, but not to internet speeds. When it comes to internet speeds, we all need more. Always. But, unfortunately, we can’t all have more. Some people have to settle for less. Millions of people all over the US struggle with low internet speeds, much lower than the FCC-defined min broadband speeds.

Today, we are here to discuss how fast 3 Mbps really is, and what you can do with that kind of speed. We will analyze all the everyday internet activities from casual browsing to 4K streaming to find the answer to the question from the title. What do you think our answer will be?

Before we dive deeper into the subject, we have to cover some basics. You may think you know these things, but you may end up surprised. You hear a bunch of internet-related terms every day – internet speed, internet bandwidth, Mbps, MBps, download/upload speed, DSL, cable/coax, fiber, satellite, etc., but do you really know what each of these terms means?

Bandwidth VS Speed VS Throughput

High bandwidth alone is not a guarantee of high-speed internet and great network performance. If the throughput is low for any reason (because of high latency, interference, jitter, packet loss), your network performance won’t be great, even if the bandwidth is more than satisfying.

The term internet speed refers more to the response time of your internet connection than to capacity, but it’s not a big deal if you’re using terms speed and bandwidth interchangeably. After all, internet providers do that all the time. We all do that. We just wanted to tell you that there’s a difference.

One thing that may cause some confusion is the difference between Mbps and MBps (or MB/sec). When you’re downloading a file, and you check out the download speeds, you may notice that the numbers don’t really match your plan. That’s because our browsers (Chrome, Mozilla) show download speed in MB/sec (Megabytes per second), not Megabits per second.

Megabyte per second is 8x greater than Megabit per second.

In large cities and urban areas in general, cable and fiber are the most common connection types. In rural areas, people often have to choose between DSL and fixed wireless internet. Satellite internet is also available across the entire US (or 99% of the US).

These are not the max theoretical speeds that can be achieved on these connection types – these are just the highest speeds offered by the American providers. That still doesn’t mean that every DSL or fixed wireless, or satellite internet user can choose the highest plan. Depending on the infrastructure, you may get much lower max speeds (up to 50/10 with DSL, or 25/3 with satellite). The slowest available DSL plan in some areas could be 3/1 Mbps.

There’s a significant disproportion when it comes to the prices of internet plans in rural and urban areas. Generally speaking, a person living in a rural area will have to pay the same monthly fee as someone living in a big city but will get much lower speeds.

Take AT&T for example. A person subscribed to DSL Internet 50 (50 Mbps per second download) will have to pay $45/month (promo price). AT&T Fiber plans are much more affordable than that. For the same promo price of $45/month, you can get Internet 500 (500 Mbps download + 500 Mbps upload). So, people living in rural areas pay much more per Mbps than people living in cities and suburban areas with better infrastructure.

Average Household Broadband Speeds in the US

The min internet speed that can be considered broadband internet is 25 Mbps download and 3 Mbps upload. This is the definition given by the FCC in 2015, and it’s still in effect even though many reports and studies are arguing that the min benchmark speeds should be increased to 100/25. 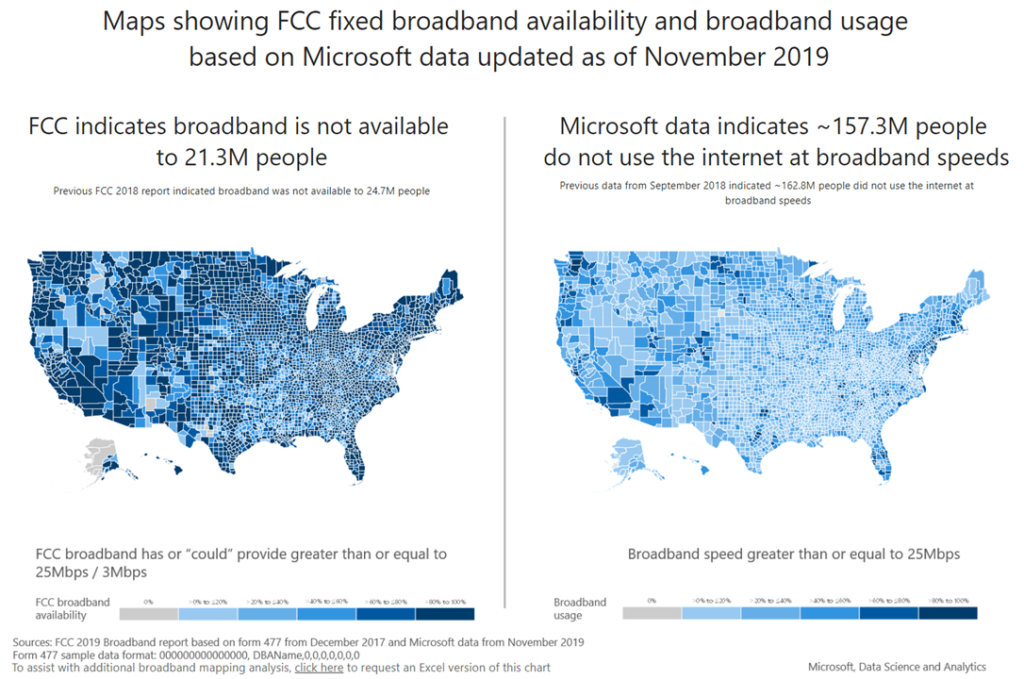 This report was published two years ago. The situation has changed since then, but we are pretty sure that we still have millions, probably tens of millions that use the internet at speeds much lower than 25/3 Mbps.

A certain percentage of people in the US can’t get anything better than 3 Mbps download and 1 Mbps (or even lower) upload. So, what can you do with 3 Mbps? Can you stream movies in HD? Can you stream music? How about gaming and Facebook live streams? Let’s see what are the recommended speeds for different online activities.

You can consult various sources to get an idea of what you can do with 3 Mbps. Let’s start with the FCC guidelines. You can see the min speeds for various activities recommended by the FCC in the image below. These speeds apply to only one device. To do the same activity on multiple devices, you have to multiply the recommended speed with the number of devices. 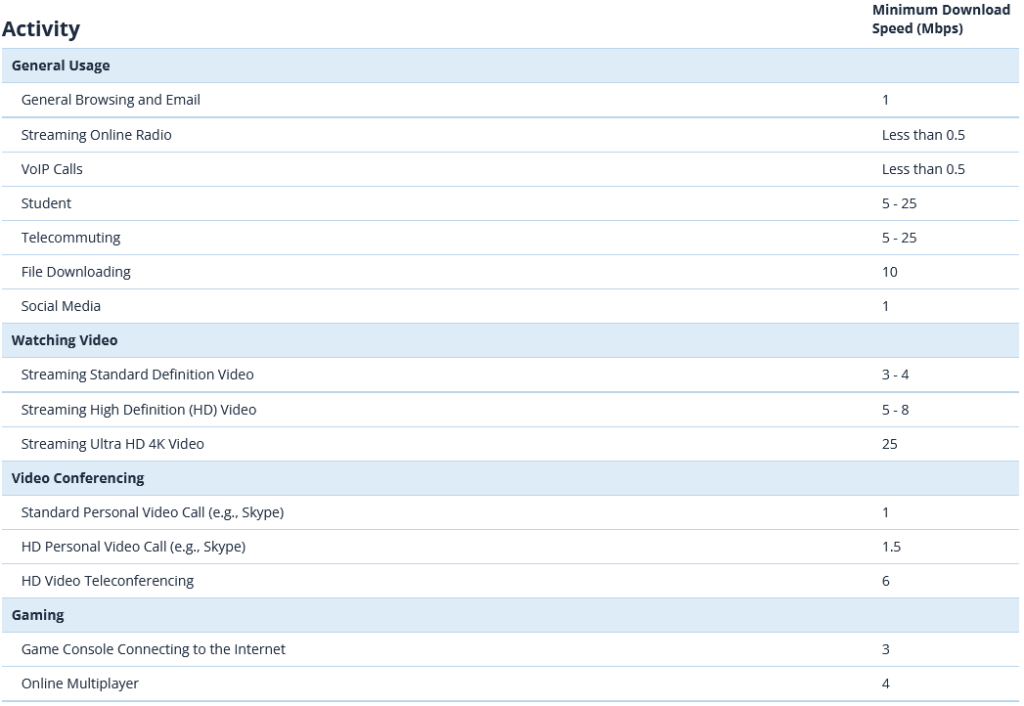 So, based on these guidelines 3 Mbps is good enough for general browsing and emails (1 Mbps), for streaming radio (.5 Mbps), VoIP calls (.5 Mbps), social media (1 Mbps), HD video calls (1.5 Mbps), streaming video in SD, and maybe for some types of gaming.

The min recommended download/upload speeds can also be found on every platform that you want to use, whether it’s YouTube, Netflix, Facebook, Spotify, or anything else.  So, let’s see what these platforms have to say.

Different streaming platforms have different minimum speed recommendations and offer their content in different qualities. 3 Mbps per second is good enough for most popular music streaming platforms – it meets all the recommended minimums. However, you won’t be able to stream audio in Hi-Res from TIDAL, Apple Music, or Amazon Music. 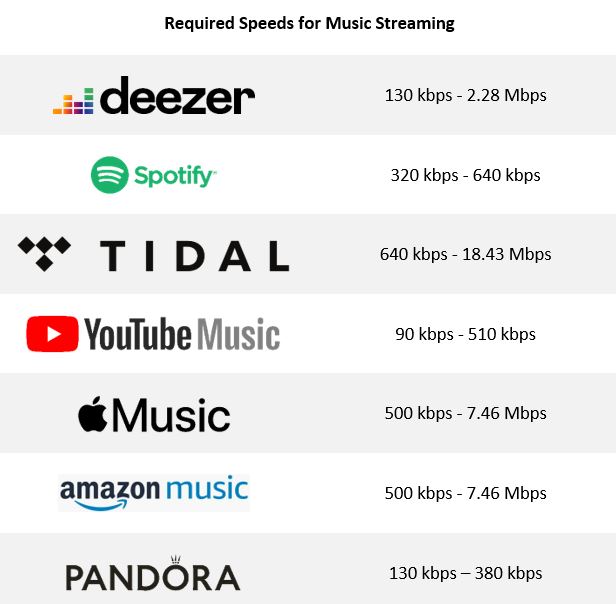 According to recommended YouTube speeds, you can watch videos in 720p HD (2.5 Mbps), but only if you’re not doing anything else. If you’re doing something else besides watching a YouTube video, you will definitely experience some buffering.

According to NETFLIX, 3 Mbps is a bare minimum for streaming in SD quality (up to 480p). You can’t stream movies in HD without buffering.

On Hulu, you can, theoretically, watch videos in HD (720p) with 3 Mbps, but only if your internet connection is perfectly stable. In practice, there’ll definitely be some buffering.

3 Mbps meets the minimum required speeds for SD video streaming on Amazon Prime Video. You won’t be able to stream videos in HD without buffering.

HBO, Disney+, and Apple TV+ don’t offer content in SD, and their minimum required speed for HD streaming is 5 Mbps. So, 3 Mbps will not be enough.

Live streaming (Facebook, YouTube, Twitch) is also not an option. The min upload speeds for these activities vary from 1 to 51 Mbps. If your download speed is 3 Mbps, then your upload speed will probably be lower than 1 Mbps. Even watching live streams in HD will be tricky with 3 Mbps. 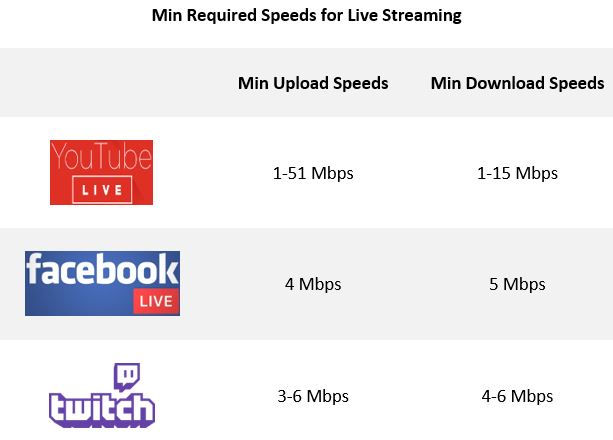 Internet connection stability is maybe even more important (or at least equally important) as the internet speed. When we say stability, we are referring to characteristics like ping (latency), packet loss, and jitter.

Packet loss is very bad for gaming. Our devices communicate with servers by sending bundles of packets back and forth. These packets can get lost in the process, especially when there’s too much data that cannot be handled in a short period of time.

Jitter is basically the change in latency over time. If the latency fluctuations are too high (for example – from 10ms to 200ms, then back to 20ms, then up to 150ms), the data packets will arrive at the destination (server) out of order, and that will cause all kinds of glitches and stuttering.

So, playing online games with 3 Mbps per second is theoretically possible but only if all the other parameters are good (latency, jitter, packet loss). It goes without saying that you’re supposed to use wired connection for gaming and that you shouldn’t be downloading anything. Wi-Fi is not good for gaming because the speeds are less consistent and the latency is higher.

Sorry to disappoint you, but we have to say no. We are aware that this may be the highest available speed in your area, but we can’t lie to you.

3 Mbps is good enough for some everyday internet activities, online radio, music streaming, and maybe video watching, but not in HD.

It could be good enough for gaming, but only if all the other parameters of your internet connection are satisfying.

Below, you can see the estimated download times for various types of media files (images, Word documents, mp3 songs, movie files) if the download speed is 3 Mbps.

A: For most streaming platforms, 3 Mbps is not enough. With 3 Mbps, you can stream videos on YouTube in 720p, stream Netflix content in SD, HULU videos in 720p, or Amazon Prime Video content in SD. Other platforms (HBO, Apple TV+, Disney+) don’t support SD and 720p content (only full HD or 4K), and the bare minimum for those platforms is 5 Mbps.

A: When it comes to gaming, the answer is not so simple. The best we can give you is – 3 Mbps might be good enough. 3 Mbps meets the min recommended speed for gaming consoles and is slightly below FCC’s recommendations for multiplayer online gaming. Still, 3 Mbps could be fast enough for most games, but only when combined with low latency, minimal packet loss (less than 1%), and very low jitter. If these conditions are not met, you will definitely experience some lag and stuttering. It is definitely recommended to have higher speeds for gaming.

Q: How long does it take to download a file if my speed is 3 Mbps?

A: It depends on the type of online class. If you’re just going to listen to your lecturer and if the class doesn’t include constant interaction (screen sharing, edit documents, use of interactive whiteboards, etc.), then 3 Mbps might be enough. For all the other scenarios, your download and upload speeds should be significantly higher. We recommend a minimum upload of 3 Mbps.

If you’re a lecturer and you are trying to work with more than one student at once, you definitely need more than 3 Mbps.

A: We will assume that your download speed is 3 Mbps and that your upload speed is below 1 Mbps. According to Zoom support, 3 Mbps is good enough for high-quality 1-on-1 video calls (the minimum recommended speeds are 600/600 kbps).

Q: What can I do to get the most out of my 3 Mbps internet plan?

A: First of all, use wired connection. It’s simply much more reliable than Wi-Fi. Using Wi-Fi is not a problem when your speeds are much higher, but it can be a problem when you only have 3 Mbps. You could also try using an ad blocker plugin and clean your cache regularly (or install a plugin that does that for you).