Internet connectivity is undoubtedly becoming a basic need for many people and businesses. Hence, a significant concern for many is how to have a fast and reliable connection.

Wi-Fi is among the most popular ways one can access the internet. It is especially popular because you do not have to be tethered to one spot, unlike when using an Ethernet connection.

Problems arise when there are dead spots where the Wi-Fi cannot reach. However, Wi-Fi extenders quickly solve such issues and increase the range of your Wi-Fi.

Wi-Fi extenders work so well that you might wonder if you can use more of them in the house without affecting the general quality of your connection. Therefore, let’s find out if you can use more than one extender and what the impact would be if you did. 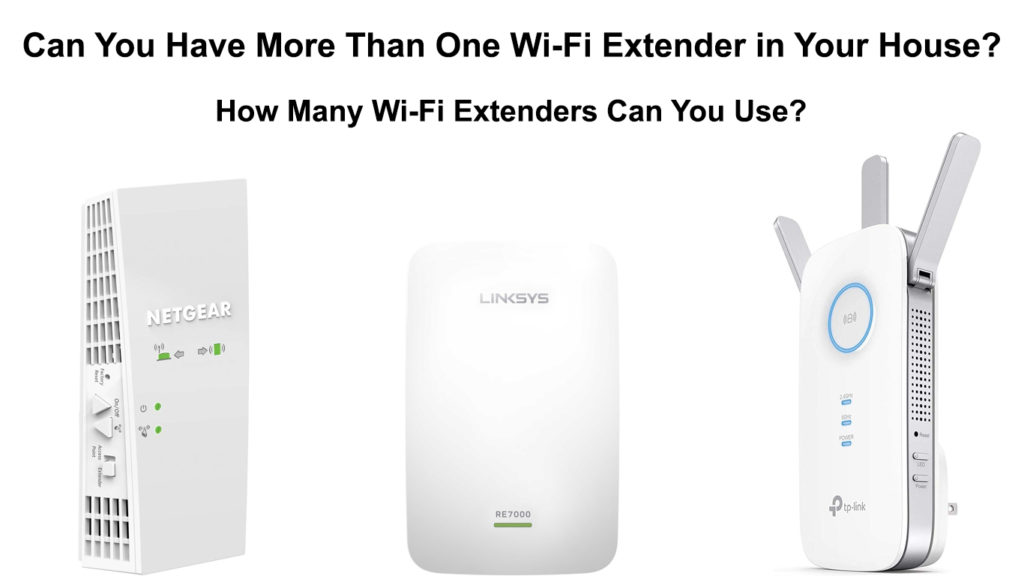 What Is a Wi-Fi Extender?

Notably, Wi-Fi extenders do not increase the strength of your Wi-Fi, but they broadcast the signal to places that were initially out of range.

The extender is plugged into a power outlet between your router and the dead zone. It has to have a connection to the router.

Extenders can be essential when you want your Wi-Fi signal to reach hard-to-reach places like the attic, basement, or outside your house.

Can You Have More Than One Wi-Fi Extender in Your House?

Yes, you can have more than one Wi-Fi extender in your house. However, for them to work efficiently, you should have two extenders, and both of them should directly connect to the router.

The setup is possible if you centrally place the router and situate the additional extenders in opposite directions of the router. That way, they both increase the Wi-Fi range in your house with little to no signal overlapping.

You could also connect the extenders directly to the router using an Ethernet cable, but some extenders do not have the features to support wired connections.

If you use multiple extenders in your house, chances are you will have signal interference with other devices.

This is because most extenders use the 2.4GHz radio frequency with a limited number of available channels. The 2.4GHz band has a few non-overlapping channels shared by other wireless devices like microwaves, baby monitors, and CCTV cameras.

Additionally, your neighbors might also face signal interference with their wireless devices. The multiple extenders and other 2.4GHz radio utilizing devices in your home would be hogging the few available channels on the band.

Also, since extenders broadcast their wireless signals using different SSIDs from the router’s SSID, your devices would not be able to switch to the strongest network seamlessly. They would require you to manually switch to a stronger network even when it is within range.

Fortunately, there are better options that are more efficient compared to using extenders, as we will see in later sections.

Can Your Wi-Fi Extenders Daisy Chain?

To daisy chain extenders is to connect extenders progressively. Meaning the first extender connects to the second, the second to the third, and so on.

If you connect a Wi-Fi extender to another extender, you will experience a tremendous loss of Wi-Fi speed.

Also, if you connect multiple extenders, they would each create collision domains because each extender would be working independently.

Collision domains are network portions shared by the extenders where data transmissions from the extenders run into each other. The collision is due to the extenders trying to transmit data on the same connection simultaneously.

If you add more extenders to the network and they all create collision domains, it would get to a point where there is no data transmission entirely. That is because channel access methods ensure only one device transmits data in a collision domain at a time as the other devices wait to prevent further collisions.

Collision domains are a drawback as they require all devices on the network to share the available bandwidth during transmission. As the primary device transmits, the other cease communications and keep retrying at later times.

Extenders in a daisy chain would also increase the round trip of data. It would have to go through all the extenders to get to the router and then back to the last extender in the chain.

Therefore, using multiple extenders, especially when connected to each other, would increase your Wi-Fi range while negatively affecting the Wi-Fi reliability and speed.

Advantages of Using a Wireless Extender

Throughout, we have seen the disadvantages that come with using wireless extenders. The drawbacks include reduced speeds and a limit to the number of extenders one can connect to a network.

That is not to say that the extenders are useless.

A wireless extender can be a reliable gadget if used appropriately and within its limitations. Some of the advantages an extender has are:

The main advantage over other wireless signal boosters is their price – they are relatively cheap.

For instance, compared to mesh networks, extenders can be bought at almost half the price.

Their sole purpose is to increase your Wi-Fi range, and they do that efficiently. However, extenders have to be appropriately placed halfway between the dead zone and the router to increase the Wi-Fi range.

Easy to Set Up

Wi-Fi extenders do not have complicated setup procedures. Most of them require a working power port and a router with WPS support.

It is important to note that some extenders don’t have a WPS button and have a slightly different setup procedure, but the setup instructions are usually very easy to follow.

Setting up a Wi-Fi Extender Using the WPS Button

How Else Can I Extend Wi-Fi Coverage in My House?

Other gadgets can be helpful when you trying to extend the Wi-Fi range offered by your router. Extenders work, but they have more limitations than other devices that can perform the same function.

We must understand the differences between these gadgets as people often confuse one with another.

Essentially, a Wireless Access Point’s purpose is to make a wired internet connection wireless. They do this by connecting to a router or gateway via an Ethernet cable and broadcasting the signal wirelessly.

They are better than Wi-Fi extenders as they use wires to connect to the router, which guarantees a more stable connection and better speeds. Also, unlike Wi-Fi extenders, access points don’t have to be placed within the router’s Wi-Fi range to work.

A notable downside is they are expensive, but they compensate for the price with their exceptional performance. 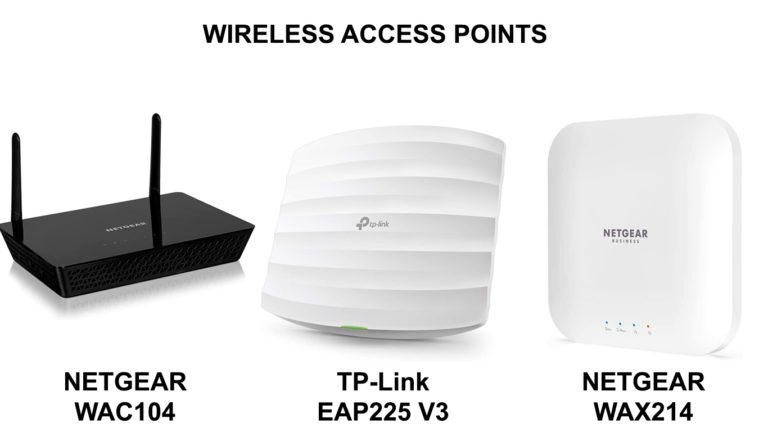 Powerline adapters use your home’s electrical installations to facilitate an internet connection.

You would need a pair of adapters, and one will connect to the power outlet near the router and then the other adapter to the outlet near your device, TV, or computer. 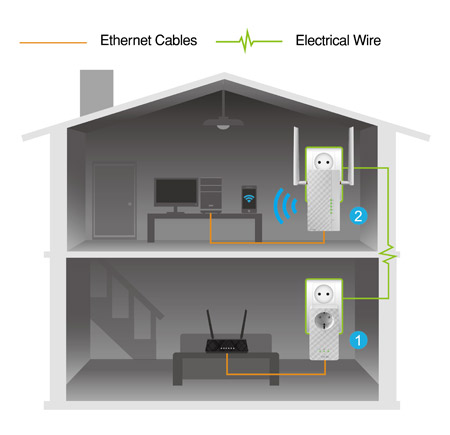 The powerline adapters are advantageous as they eliminate the need to run new cables, and you could use the adapters to connect a new AP or extender further away from the router.

Note that the adapters alone do not increase the Wi-Fi range. They require complementary devices to do so.

MOCA adapters have similar functionality as powerline adapters; however, they work with coax connections (not electrical installations).

A mesh network is one of the best options for increasing wireless coverage in your home.

A mesh network is a cluster of internet connection redistribution points and endpoints (nodes) that branch off each other, thus increasing Wi-Fi coverage.

The devices act as a single Wi-Fi network and facilitate client devices to connect to the point with the strongest Wi-Fi.

A mesh network is better configured to provide reliable and fast Wi-Fi connection around the house, and it’s definitely a better option than using two or more Wi-Fi extenders. A mesh network is also equipped with additional features such as parental controls. Some even have the capabilities to respond to voice commands.

Google Nest Wi-Fi is an excellent example of a reliable mesh network. 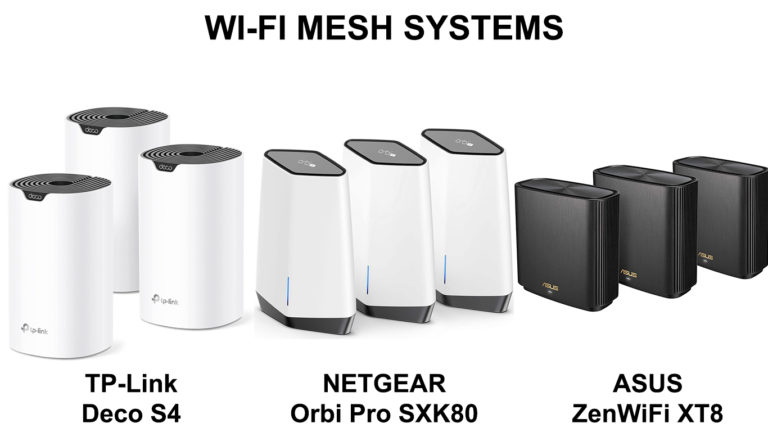 You could also use your old router as an access point or repeater to extend your Wi-Fi signal. If you enable the access point mode on the router and ensure its DHCP is turned off, the router will broadcast Wi-Fi to other parts of your house.

You could establish a LAN-to-LAN connection or LAN-to-WAN connection, and the secondary router will broadcast Wi-Fi.

A LAN-to-LAN connection would see that the secondary router acts as an access point. On the other hand, a LAN-to-WAN connection would ensure both routers broadcast individual signals while relying on the same internet network or ISP.

As we have seen, extenders are at peak performance if you use one or two with your current network. You could use three if you wish, but if you use four or more, you are bound to face most of the problems discussed above. The upside is there are better options to extend your Wi-Fi range, although they would require you to pay more.