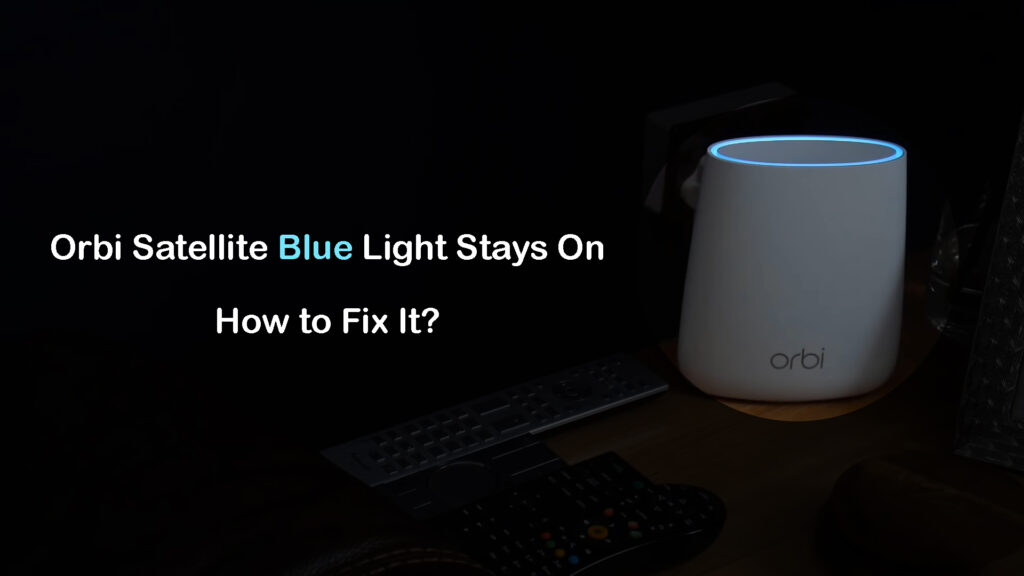 When the Orbi satellite gets stuck on blue light, it generally doesn’t indicate that there is some serious problem, especially if the network is working just fine even though the blue light stays on.  The Orbi Satellite blue light is something we are used to seeing, but for a limited period of time (usually 180sec). After 3 minutes, this light is supposed to disappear.

This blue light indicates that the connection between the satellite and the Orbi router is good. When the blue light stays on, we can’t help but think that there is something wrong with our network. After all, this is not a normal LED behavior for Orbi. 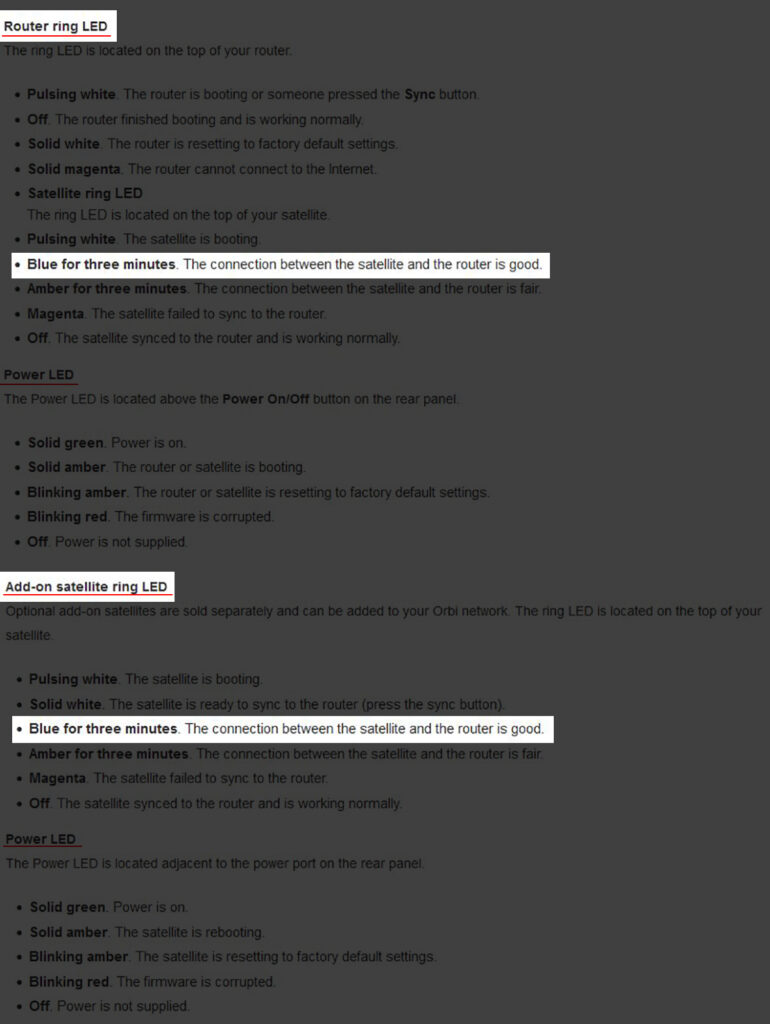 The good thing is that some quick fixes can make the blue light on our Orbi router go off as intended. So, let’s see what we can do about it.

Here are some recommended solutions that will most likely help you get rid of the blue light. You just have to be patient when you complete each step since it usually takes 1 to 3 minutes for the blue satellite light to go off.

This is a pretty simple and effective solution. Just turn off the satellite, leave it off for a few minutes and then turn it on again. The solid blue light will appear and, in most cases, it will disappear after a minute or so.

If the previous step didn’t fix the Orbi satellite stuck on a blue light issue, then it’s recommended to restart your entire Orbi network. This means you need to power down the Orbi router, the modem, and all the satellites. Here is how to do it properly:

The blue light on your Orbi satellite should go off as usual. If it doesn’t, move to the next step.

Sync the Router and the Satellite Again

Syncing Your Orbi Satellite(s) with Your Orbi Router

A loose cable or a connector can easily make the entire network unstable and unusable, sometimes resulting in the blue light staying on. Luckily, it’s pretty easy to check whether this is the real reason behind the problem. Make sure to inspect both ends of the cable and confirm that everything is connected properly.

Some users have reported that upgrading the firmware to the latest version helped them fix the stuck blue light issue.

Updating the Orbi router firmware is possible via the admin dashboard (or the Orbi app).

How to Update Your Orbi Mesh System (via the Orbi app)

IMPORTANT: Do not interrupt the firmware upgrade process – this could damage your router.

If the blue light on your Orbi satellite stays on even after the update, you can either try to reset your Orbi mesh system or disable the LED lights altogether.

Reset Your Orbi (Satellite and/or Router)

If nothing else works, you could try resetting your Orbi. You can reset only the problematic satellite or the entire system. If you want to reset the entire system and start afresh, you will have to repeat the following procedure for each unit. As you are probably aware, after you reset your Orbi router and/or satellite, you will have to reconfigure everything, adjust all the settings from scratch, and sync them together.

Each Orbi unit has a reset button on the back. Locate it, take a paper clip, and press it. Hold it until the power LED starts flashing amber. 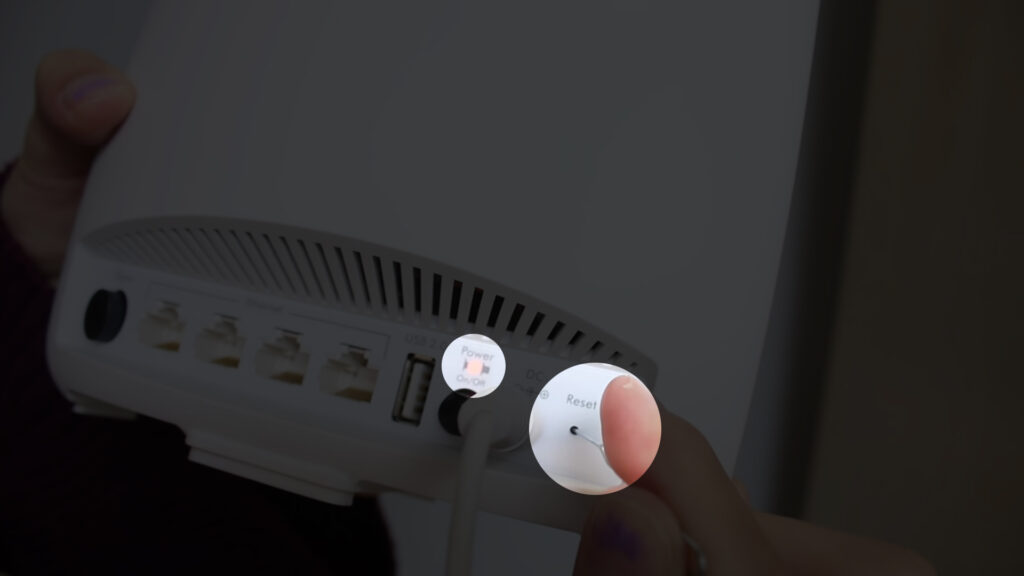 Release the button after the light starts flashing amber, and give the unit some time to boot up.

How to Reset Your Orbi Mesh System

Turn Off the LED Ring Manually (Through the Admin Dashboard)

We are well aware that turning the lights off doesn’t really solve the problem, but it does make the light go off. If you’re absolutely certain that your satellite is working fine, and you don’t want to call NETGEAR support, you can simply turn it off in your Orbi router’s settings. Note that you can’t do this for every Orbi model, but it should work on most Orbi systems.

To disable the lights, you need to log in to your Orbi router. You can type in orbilogin.com into your browser, and then enter your admin username and password. Once logged in, navigate to Attached Devices, and select your router. This should open the Edit Device page. 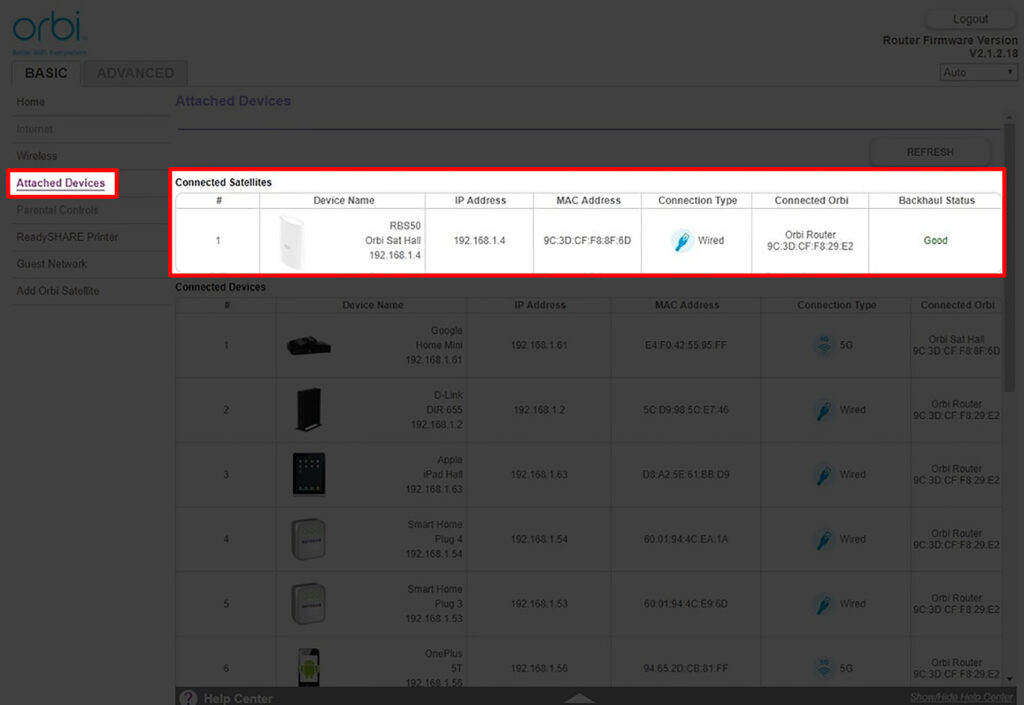 After the Edit Device page opens, you should see the LED light section. Here, you can turn the lights on/off by clicking on the slider. On some models, you can also adjust the brightness of the lights.

We are pretty sure you have fixed the Orbi satellite blue light stays on issue by now. However, if it is still here, even after applying all the solutions listed in this post, it’s recommended to get in touch with NETGEAR tech support and explain the problem. They will guide you through the troubleshooting process and help you get rid of the blue light.

Answer: No. Under normal circumstances, the light on your Orbi satellite should turn off after it establishes a connection with the router. You will see different-colored lights during the initial setup and during the boot-up process. You will also see the lights if the connection is poor or if you’re trying to sync the router with the satellites. After establishing a good connection with the router, the LED light will turn solid blue and should disappear in three minutes.

Question: How do I turn off the blue light on Orbi satellite?

Question: What does constant blue light on Orbi satellite mean?

Answer: Steady blue light on your Orbi satellite indicates a successful connection with the Orbi router. The light is supposed to disappear after 3 minutes. If it doesn’t disappear and you still have internet access, then you don’t really have to do anything about it. But if you don’t have internet access or if it annoys you, try applying the fixes listed in this article. Hopefully, one of them will make the blue light disappear.