Wi-Fi is arguably the most ubiquitous type of wireless connection technology, being the primary type of connection used by most homes and businesses.

Ironically, many people still do not know what the name Wi-Fi stands for. In the course of this article, we will discuss the meaning and origin of the term Wi-Fi. We will also discuss the various Wi-Fi protocols and standards that make up the technology as well as its strengths and shortcomings. 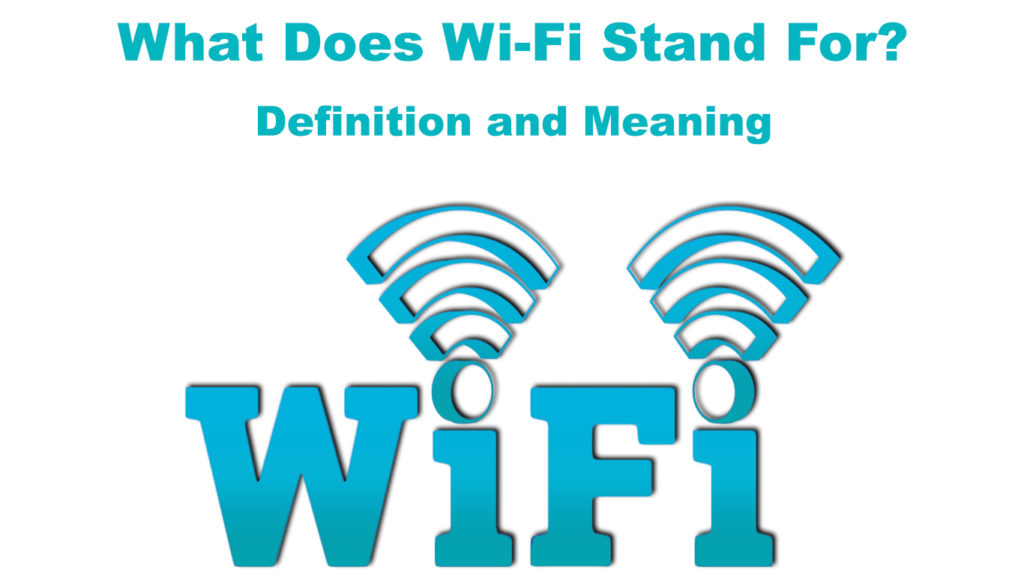 For starters, Wi-Fi is technically based on WAN technology, which was first used in the early 1970s. However, commercial Wi-Fi was not a thing until 1997, when the Institute of Electrical and Electronics Engineers (IEEE) published the 802.11 Direct Sequence standards.

The standards typically laid down the ideal architectures and specifications of effective WLANs, which is the technical name for Wi-Fi networks. Among the specifications was the use of Frequency-Hopping Spread Spectrum (FHSS). It also used the 2.4GHz band, with speeds of 1-2 Mbps.

Needless to say, modern Wi-Fi networks are not entirely built according to the original 802.11 specifications. For instance, the most recent release of the IEEE wireless standard, the 802.11n – which added a 5GHz band – compliments the original 2.4GHz, allowing speeds of up to 600 Mbps.

Notably, the IEEE 802.11 notations were, and still are, names for the internationally agreed standards of wireless internet connections and not any particular products.

The Story of Wi-Fi

As the IEEE 802.11b standard, which was launched in 1997, started gaining global traction, there was confusion over the features and specifications that Wi-Fi products should have.

To reduce this confusion and ensure that all Wi-Fi devices were compatible, a non-profit organization called Wi-Fi Alliance was born in 1999.

Unlike the IEEE, which is primarily staffed with scientists and technicians, the Wi-Fi Alliance was mostly a collaborative effort between the largest tech manufacturers in the world. These include Apple, Sony, Comcast, Samsung, Qualcomm, Motorola, Microsoft, and T-Mobile.

The primary mission of the Wi-Fi Alliance was to make business easier for the electronics manufacturers. Indeed, the Alliance played a considerable role in ensuring that Wi-Fi products would be similar and interoperable across the board.

The other key role of the Alliance was to promote and popularize the word Wi-Fi, which was a key selling point to both the Alliance and its assorted partners. The first step to that effect involved trademarking the name itself and creating the highly recognizable yin-yang logo.

So, the Alliance undertook to popularize the word Wi-Fi and make it universally synonymous with wireless networks. This involved imprinting both in every item used in related communications and promotions, ranging from t-shirts to pens to routers and switches.

Origin of The Word Wi-Fi

The word Wi-Fi is derived from the tagline “The Standard of Wireless Fidelity”, which was used to promote Wi-Fi Alliance products in the period between 1999 and 2002. However, it wasn’t the Alliance that came up with the term.

It was a marketing company called Interbrand that did it. The company is one of the best when it comes to brand design and promotions, being the brains behind iconic names like Prozac and Compaq.

There was one problem though; the word itself had no literal meaning and would lead to even more confusion on the consumers’ part.  And since experts at Wi-Fi Alliance could not come up with a suitable and sensible meaning for Wi-Fi meant that the marketing gurus at Interbrand had to do it.

As it always happens when a branding team handles technical issues, the Interbrand team came up with a tagline that was more promotional than logical. Essentially, they brainstormed dozens of names and phrases that start with Wi and Fi, and eventually settled on “Wireless Fidelity”.

At a time when many people were familiar with hi-fi, which ironically means high fidelity, the Wi-Fi Alliance figured that a similar sounding name for the IEEE 802.11 standard would be well received. It is therefore not surprising that they chose “Wireless Fidelity”, which sounds very close to “high fidelity” as the official definition of Wi-Fi.

Ironically, the marketing tagline only served to confuse consumers and experts even more, as the Wi-Fi Alliance neither created standards nor did they guarantee anything called fidelity.

It was therefore retired after a year, leaving only the singular word Wi-Fi and the logo to appear on products.

The Wi-Fi technology was not created by any specific person or company. It is simply a product of many years of cooperation between hundreds of scientists mostly working under the auspices of the IEEE.

The first-ever wireless local area network was developed in 1992 by Australian researchers working for the Radiophysics Division of CSIRO. Although the WLAN concept had been extensively researched before, CSIRO ostensibly found the perfect architecture for high-speed connections.

Another theory is that it was the then-chairman of the IEEE, Vic Hayes, who played the biggest role in designing the 802.11 standards, and is thus the “father of Wi-Fi”. Indeed, it was Mr. Hayes together with Bruce Tuch, who convinced the IEEE to develop the Wi-Fi standards.

How Do Wi-Fi Networks Work?

Wi-Fi is, in effect, a radio-based communication technology. This means it uses radio frequencies as the medium of data transmission. The use of radio waves allows Wi-Fi signals to be transmitted over long distances at low costs and without significant losses in strength.

The key components of a Wi-Fi network are wireless adapters, routers, and antennas. So, if you are using your phone to access a signal, the phone’s internal antenna will receive the signals emitted by the router.

The antenna then converts the signal from the radio to electrical format, and vice versa, depending on whether you’re receiving or sending data.

Wi-Fi frequencies are also quite strong compared to those of other forms of communication. Older device models typically use 2.4 GHz while newer models come equipped with both 2.4 GHz and 5 GHz bands.

There is no question that Wi-Fi is an extremely important utility in every modern household and business. The benefits go above and beyond the actual connections to the internet.

Here are a couple of reasons why you should consider setting up a Wi-Fi network if you haven’t done so:

The main advantage of Wi-Fi networks is their relative flexibility compared to other forms of networks.

The lack of cables and fixed wires means you can move your receiving device, together with your router from one spot to another within the coverage area.

Wi-Fi allows devices within a network to access other devices and network resources at the same time.

For instance, the use of CSMA/CA, which focuses on Collision Avoidance rather than Collision Detection means that two or more PCs can access a printer simultaneously without issues.

To set up a Wi-Fi connection, you only need a router and a physical connection to the internet.

You can connect to the internet through a modem, a satellite dish, or a fiber optic cable. All these are provided by your ISP.

You don’t need any connections to the receiving devices, but you may still choose to use Ethernet cables depending on your preferences.

The costs of setting up a Wi-Fi network are thus very low as you don’t only need to buy fewer devices but also don’t need to spend much on technician assistance during installation.

Additionally, if you ever need to remove a connected device for any reason, you only need to know its IP address and then remove it from your router’s dashboard. You don’t need to fix or remove any cables for any of the above, which saves you both time and money.

As much as Wi-Fi is a great technology and undoubtedly the future of communications, it is not without shortcomings.

Below are 2 of the most concerning drawbacks of Wi-Fi:

Wi-Fi signals are incredibly vulnerable to hacking and interference by hackers and malicious groups.

In some cases, hackers may use the network bandwidth to transfer heavy files or commit fraud, thereby increasing the owner’s liabilities. In some situations, the repercussions are much worse. Cases of identity theft, sending of malicious software, and widespread bank account hacking are very common among people using public or unsecured Wi-Fi.

Whatever the topology, all the devices within any Wi-Fi network can send requests to the router at any time. This allows for faster speeds when the number of connections is low.

But when there are many users sending data at the same time, the router can get overwhelmed, which reduces transmission speeds.

Wi-Fi signals are also highly susceptible to interference from other radio frequencies and even weather conditions like rain. So, you may experience slower speeds when it’s raining, for instance.

For more stable speeds, signal boosting equipment such as repeaters, amplifiers, and even multiple routers are recommended.

Due to the inflexible and expensive nature of other types of internet networks, Wi-Fi has emerged as the most popular way for individuals, homes, and organizations to connect to the internet.

Among the benefits of Wi-Fi are the low setup costs, ease of configuration, and portability.

Unfortunately, many people still don’t know what Wi-Fi actually stands for, and its history. Hopefully, this post has helped clear the air.