Accessing the internet over Wi-Fi is common in many homes and businesses. The advancement of wireless technology resulted in routers transmitting signals over different frequency bands. For that reason, we look into what a frequency band is regarding your router’s signal transmission. Also, we will list and explain different ways to determine your router’s frequency. 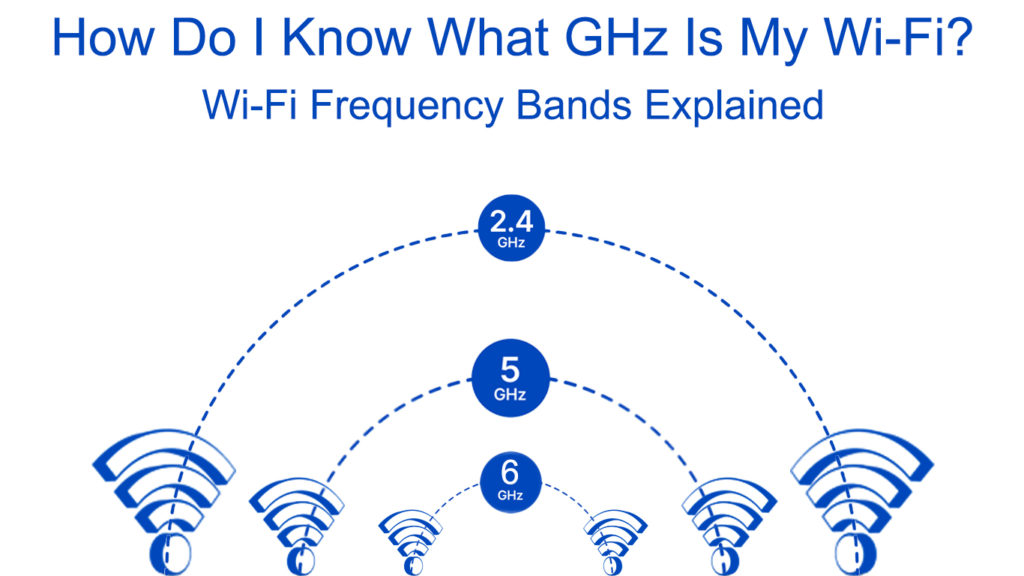 Unit measurements can be confusing at times. Hence, to understand Gigahertz (GHz), we have to know about Hertz (Hz) first. Hertz is a unit of measuring frequency, and it is usually abbreviated as Hz. It is the unit for measuring frequency in the International System of units.

Hertz measures the rate of a cycle per second. We can use Hertz to measure the number of times something happens within a second. However, we use Hertz to measure frequencies of particular concepts more than others until it has become a measurement standard for said concepts.

Consequently, Hertz is used for measuring wave frequencies such as sound waves, light waves, and radio waves. Also, Hertz can measure computer speeds concerning how many instructions cycles the processor can conduct within a second.

The variation leads to the formation of separate but related waves perpendicular to each other. When the electronic wave is oriented horizontally, the magnetic wave orients vertically, and the cycle continues as the waves are sent from the transmitter to the receiver.

A single perpendicular to horizontal orientation change is what we refer to as an oscillation.

Therefore, the number of oscillations per second is measured in a unit called Hertz.

Wi-Fi signals are measured in GHz and MHz because communication signals usually have very high frequencies.

What GHz Can Wi-Fi Transmit?

The range of the radio waves spectrum is from 3kHz to 300GHz. However, to minimize signal interruptions from other transmitters, the governments regulate radio wave frequencies through communication authorities in various countries.

For instance, the FCC (Federal Communications Commission) is responsible for frequency allocation in the United States. The allocated or licensed frequencies are long-range frequencies and are mainly used by various organizations to speak to their client devices.

On the other hand, some unlicensed frequencies are intentionally left free for use by different gadgets and transmissions. These frequencies fall under the Industrial, Scientific, and Medical (ISM) purposes frequencies. That means you do not need a license to use those frequencies hence why they are commonly used in router and access point transmissions.

The ranges of radio wave frequencies that Wi-Fi can use to transmit data are known as the Wi-Fi frequency bands.

Routers and access points use two Wi-Fi bands: the 2.4GHz Wi-Fi and the 5GHz Wi-Fi band. The recent addition of the 6GHz band is less susceptible to signal interference and is faster, although by a small margin.

What GHz Is My Wi-Fi?

Since Wi-Fi uses electromagnetic signals to transmit data, we can determine what GHz an access point is transmitting.

Before finding out what GHz your Wi-Fi is, we must know the different common Wi-Fi frequencies used. They include:

Every router supports a 2.4GHz frequency band, which is the most common on all devices. It consists of frequencies ranging from 2401 to 2484MHz. The range might slightly differ depending on the frequency regulations of your area.

The 2.4GHz band is preferable because it is cheap to install and use. Additionally, it can penetrate obstacles, increasing the distance over which the frequency band can still be helpful. For this reason, 2.4GHz devices have evolved to include microwaves, baby monitors, and security cameras.

The only downside of this Wi-Fi frequency is that it’s overcrowded, and many devices use the frequency range to carry out their normal functions. The congestion is also caused by the few channels available on the 2.4GHz frequency band.

Channels in wireless internet connectivity entail smaller bands within a more prominent band like the 2.4 and 5GHz. Channels in the 2.4GHz band have a 5MHz width and a 16.25 to 22MHz range per channel.

Therefore, with the common 5MHz width and 22MHz range per channel, we have 13 channels.  Unfortunately, we cannot use all those channels. Instead, we would use non-overlapping channels 1, 6, and 11.

While determining the available channels, we should remember that 2MHz is left out to act as the channel spacing to reduce signal interference from older routers that might occupy those frequencies. The 802.11 b/g/n/ax standards are built to work with the 2.4GHz frequency band.

The 5GHz frequency band consists of frequencies ranging from 5GHz to 5.8GHz. The wide range of frequencies also indicates that there are more channels available in this band compared to the 2.4GHz band. There are 23 channels on the 5GHz band that do not overlap; therefore, there will be less signal interference.

5GHz can also transmit more data because it does more oscillations per second. However, it transmits data over shorter distances compared to the 2.4GHz band. 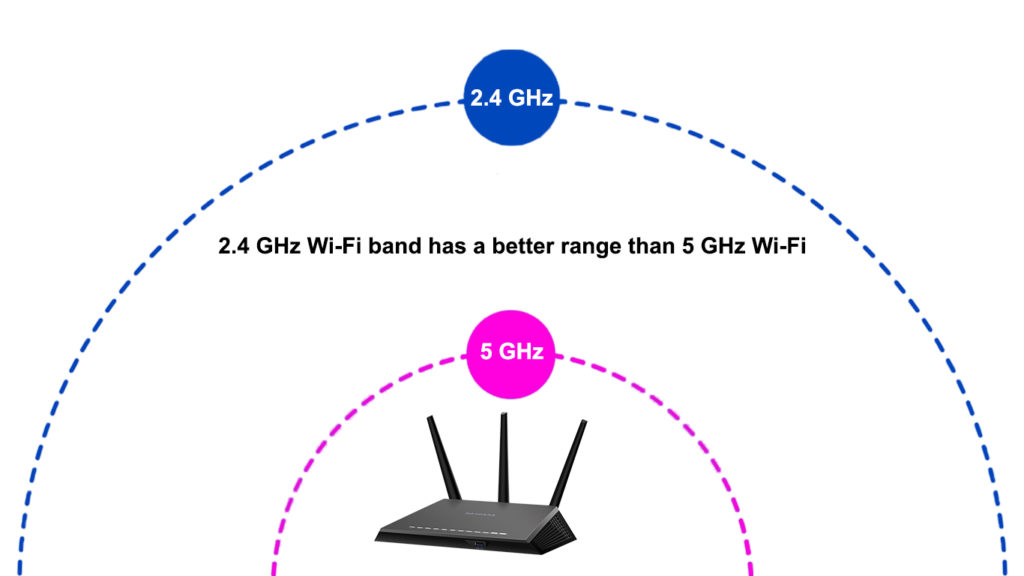 The a/h/j/n/ac/ax 802.11 wireless standards are compatible with 5GHz Wi-Fi connections.

The 6GHz frequency band is a new standard that is still carving its niche in the market. It is the frequency band between 5.925 GHz and 7.125GHz, making it the highest frequency range band of 1200MHz.

The FCC has recently made the band free or available for unlicensed use mainly because of the influx of wireless devices that can congest the available frequency bands. The band also incorporates technology such as OFDMA that facilitates more reliable simultaneous connections.

The band is less prone to interference since few devices are compatible with the protocol. Also, the Wi-Fi band locks out devices from legacy bands meaning the connected device will stay unbothered for a long time to come. The band’s goal is not to increase Wi-Fi speed but to increase the network’s throughput.

How Do I Know What GHz Is My Wi-Fi?

Now that you know what GHz is, in terms of your wireless connection, the next obvious question is how to tell what band you’re connected to? Fortunately, a few hacks can help you determine your Wi-Fi band without a fuss.

The easiest and quickest way to find your router’s frequency band is by checking SSIDs broadcasted from your router. In most cases, routers have dual-band capabilities; therefore, they can support both – the 2.4 and 5GHz, frequency bands. Also, some routers have tri-band support and can transmit signals either over two 5GHz bands and a 2.4GHz band or over 2.4 GHz, 5 GHz, and 6GHz bands.

If your router supports three Wi-Fi bands on three Wi-Fi networks, you will see three SSIDs. For example, if you are at home and using a triband router, the SSIDs might look like: Homewifi2.4, Homewifi5GHz, and Homewifi6GHz.

Some routers, however, use the same SSID for all the available bands. If that’s your case, there are other ways to tell your frequency band. Or, you can simply name each Wi-Fi band in your router settings differently.

Another easy way to determine your Wi-Fi band is to access the router’s settings through a webpage.

Once you log in, go to the wireless settings tab and see what frequency bands are active. Some routers can allow you to view the devices connected to a particular band. You can also switch off a particular band and use the one you prefer now that you know what they entail.

There are also freely available apps that can scan your wireless signal and determine the band and channel of your router. These apps include Wi-Fi Analyzer, available for Android and iOS devices. Once you download and install the app, you can scan your Wi-Fi network to determine various aspects, including channel number and wireless band.

iPhone users can also download the app Airport Utility from the Appstore, and it will help them know more about their Wi-Fi networks.

While you can’t see the Wi-Fi band you’re connected to, you can (on some devices) force the 5 GHz Wi-Fi connection. Doing so will give you better speeds and overall performance when you’re close to the router, but it will be tricky if you tend to move your device around the house. Remember, the 5 GHz band has a shorter range than the 2.4 GHz band. So, if you force the 5 GHz band, you may lose your Wi-Fi connection when if you move away from the router.

On some devices (like Windows PCs), you can select the preferred band, which is a better option than forcing one band since it doesn’t eliminate the other band.

How to Select the Preferred Wi-Fi Band in Windows 10

The different Wi-Fi bands have varying capabilities that make the wireless technology interesting. We can now tell the Wi-Fi band we’re connected to with a few taps on a screen or a few clicks on a computer. It is even better because you will know the effects of changing your wireless band frequency.