The emergence of Wi-Fi technology in 1997 changed how devices access the internet. You can now wirelessly connect your devices such as computers, smartphones, printers, televisions, tablets, and gaming consoles to the web without using bulky cables and wires.

Wi-Fi technology is available in various standards, including IEEE 802.11 a/b/g/n/ac/ax. To avoid confusion and make it easier for end-users to identify the various specifications, the Wi-Fi Alliance opted for more simplified naming protocols, ranging from Wi-Fi 1 to Wi-Fi 6.

This post discusses Wi-Fi 4 and everything you need to know about this Wi-Fi standard. Keep reading to learn more. 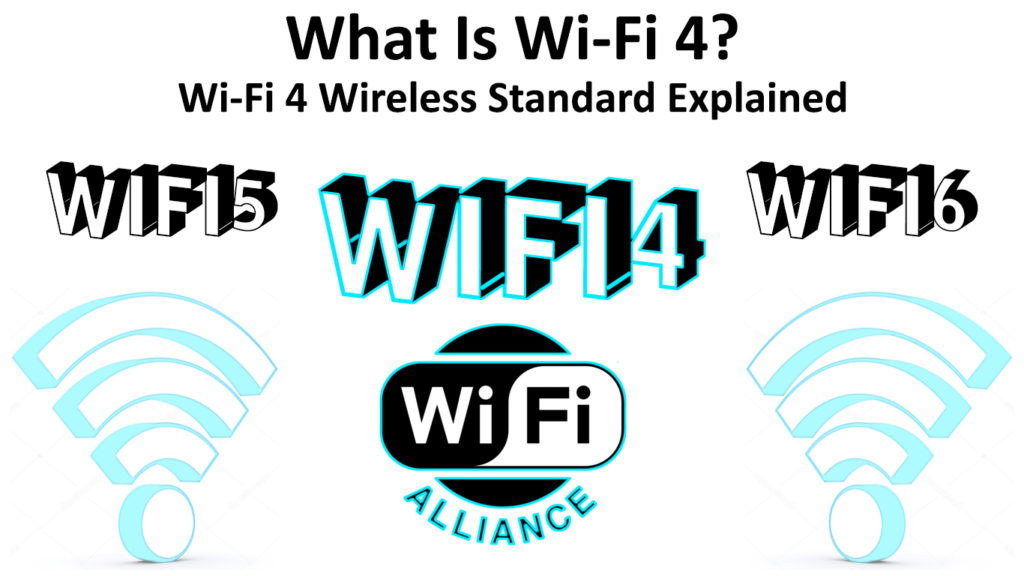 What Exactly Is Wi-Fi 4?

Wi-Fi 4 is a high-speed wireless networking specification established in 2009 that uses multiple antennas to increase data speeds. Also known as 802.11n, Wi-Fi 4 is renowned for its fast data transmission rates and broad coverage.

It is an upgrade to 802.11g (Wi-Fi 3), which is somewhat slow and only supports the 2.4 GHz frequency band. In contrast, Wi-Fi 4 supports maximum speeds of 300 Mbps, unlike its predecessor, which supports maximum rates of only 54 Mbps.

With a Wi-Fi 4 router, you can connect multiple devices at once since it supports simultaneous connections. This Wi-Fi standard also uses two different frequency bands, including 2.4 GHz and 5 GHz.

Since some devices only operate on either 2.4 GHz or 5 GHz, you can switch between the bands seamlessly depending on your requirements and device specifications.

Another breakthrough associated with Wi-Fi 4 is MIMO technology, which stands for Multiple-Input, Multiple-Output. The MIMO technology allows simultaneous transmissions to a single device at a time without any interruptions.

Even though Wi-Fi 5 and 6 are now available, most routers today still use the Wi-Fi 4 standard.

A Brief History of Wi-Fi 4

Now that you know about Wi-Fi 4 (IEEE 809.11n) let’s delve into its history. Wi-Fi 4 came into the limelight in 2009 after its predecessor, Wi-Fi 3, faced challenges with speed and data throughput.

Wi-Fi 3 was only available on the 2.4 GHz band and could not support the latest wireless devices by then. As more gadgets became Wi-Fi-capable, it was only a matter of time before users started complaining of interference.

The 2.4 GHz frequency band is highly susceptible to interference and congestion since most devices, such as cordless phones, baby monitors, and microwaves, are on this network.

Wi-Fi 4 came to change all that by introducing the 5 GHz band along with the already established 2.4 GHz band. The 5 GHz band has over 20 non-overlapping Wi-Fi channels, creating adequate room to connect multiple devices without overcrowding the network.

Some of the most notable improvements brought by Wi-Fi 4 included:

How to Check if You Have Wi-Fi 4

Ever since the Wi-Fi Alliance simplified its Wi-Fi naming protocols, many end-users have been interested to know what Wi-Fi version their gadgets run on.

With so many Wi-Fi specifications out there, knowing the exact version your devices operate on can be somewhat confusing and overwhelming.

Fortunately, checking the Wi-Fi version your computer or smartphone supports is straightforward. Here are the steps:

Checking the Wi-Fi version on your Windows PC 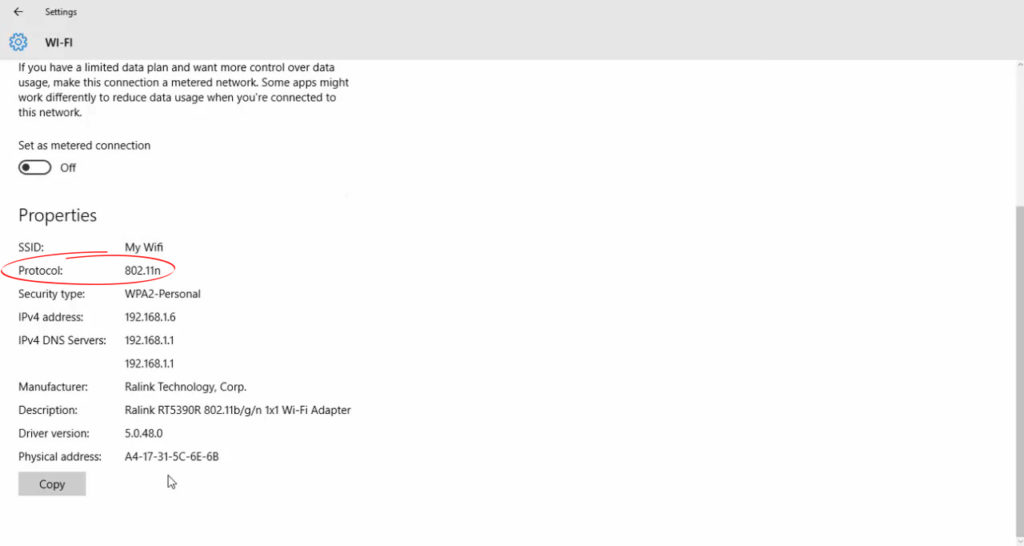 Checking the Wi-Fi version on your Linux PC

Checking the Wi-Fi version on your Smartphone

It’s critical to establish what Wi-Fi version your smartphone supports before buying a wireless router. After all, it won’t make sense to buy a Wi-Fi 4 router if you have old equipment that does not support this Wi-Fi standard.

Follow these steps to check the Wi-Fi version your smartphone supports:

Note: You can also check the Wi-Fi version your device supports by searching on Google and reviewing your phone’s specifications. This process applies to all Android and iOS devices.

Wi-Fi 4 is widely acclaimed for its broad network coverage. In any case, Wi-Fi 4 supports both the 2.4 GHz and 5 GHz frequency bands, with the former renowned for its extended range and signal strength. The 2.4 GHz can penetrate through thick walls, doors, and other obstacles without any issues.

Unlike previous Wi-Fi versions, Wi-Fi 4 has a broad reach of over 230 feet (70 meters) indoors and 820 feet (250 meters) outdoors. Besides, it supports 20 MHz and 40 MHz bandwidths, allowing for greater throughput and data transmission across long distances.

It’s not only the range that makes Wi-Fi 4 superior to legacy Wi-Fi versions. It also supports channel bonding, which occurs when upstream and downstream channels combine to increase data traffic your wireless router can comfortably support.

What Speeds Can You Achieve with a Wi-Fi 4 Router?

In theory, you can reach maximum speeds of 300 Mbps using a Wi-Fi 4 router. Some tech experts claim you can achieve up to 600 Mbps on the latest wireless routers that run on the 802.11n standard.

Theoretical Wi-Fi speeds are difficult (almost impossible) to attain in the real world. Besides, you won’t need such high transmission rates even if your router can achieve them. The average downstream rate is 45 Mbps, which is more than sufficient to meet your needs.

Note: Wi-Fi speed also depends on the transmission rate and network bandwidth provided by your Internet Service Provider. Your router will also determine the overall network speeds you should expect to experience.

Check your Wi-Fi version if you often experience frequent downtimes, painstakingly slow network speeds, limited coverage, and lagging issues. You might be using Wi-Fi 3 or some other older version.

Upgrading to Wi-Fi 4 from legacy Wi-Fi versions does not have to be complex. You only need to invest in a Wi-Fi 4 router to enhance your wireless connectivity and experience improved speeds.

Ensure all your wireless devices, including your phones, gaming consoles, laptops, and smart TVs, support Wi-Fi 4 before upgrading your router. Doing so will help avoid incompatibility issues.

Wi-Fi 4 has numerous advantages, and it is not surprising that it is still in use today, even after the emergence of better and faster versions like Wi-Fi 5 and Wi-Fi 6. Here is a list of the benefits associated with Wi-Fi 4:

One of the main benefits of Wi-Fi 4 is the fast network speeds. Wi-Fi 4 does not increase your internet speed but ensures you make the most out of it by facilitating faster data transmission. It supports Multiple-Input, Multiple-Output (MIMO) technology, and allows fast, simultaneous transmissions to a single device at a time without any interruptions.

Another noticeable benefit of Wi-Fi is the significant data throughput. As you know, throughput is the amount of data transmitted over a network within a specific timeframe. Wi-Fi 4 supports maximum theoretic throughputs ranging from 300 to 600 Mbps.

Unlike the first three Wi-Fi versions that only support a single frequency band, Wi-Fi 4 supports both the 2.4 GHz and 5 GHz frequency bands. By supporting two bands, you can access the internet without overcrowding your network. You only need to switch your device to the 5 GHz band to avoid sharing the connection with devices like baby monitors, smart speakers, and cordless phones.

Wi-Fi 4 has a broader network coverage than its predecessors. It can reach over 230 feet (70 meters) indoors and 820 feet (250 meters) outdoors, making it the ideal solution for coverage issues back in the day. Besides, the 2.4 GHz band can penetrate through thick walls, doors, and obstacles, extending the range of your network.

The Wi-Fi 4 standard is more secure than legacy Wi-Fi versions. It supports Wi-Fi Protected Access 2 (WPA2) and uses the Advanced Encryption Standard to encrypt data on your network. These security mechanisms help keep hackers at bay.

Wi-Fi 4 has been around for almost a decade, demonstrating how much people trust this wireless technology standard. Many people still rely on Wi-Fi 4 despite the emergence of better and more efficient Wi-Fi versions in recent times.

Since Wi-Fi 4 supports two different frequency bands, you do not have to contend with other devices that run on the 2.4 GHz band. Wi-Fi 4 also uses the 5 GHz band, which is less susceptible to electromagnetic interference and congestion.

Another advantage of Wi-Fi 4 is that it is compatible with all previous legacy versions ranging from Wi-Fi 1 to Wi-Fi 3. Backward compatibility is the ability to connect your old equipment to Wi-Fi 4 without any issues. A phone that runs on Wi-Fi 3 can also operate on Wi-Fi 4 seamlessly.

All internet connections have upstream and downstream channels. Channel bonding occurs when these channels combine to increase data traffic your network or wireless router can comfortably support. Wi-Fi 4 supports channel bonding, allowing for increased data transmission between your devices. With this technology, you can access multiple sites, stream heavy content, or play online games without lagging issues.

Wi-Fi 4 routers are readily available and have been a mainstay in the market since the adoption of this standard in 2009. Many people still use Wi-Fi 4 routers because the latest Wi-Fi standards are either incompatible with their devices or too expensive and unavailable.

The Wi-Fi 4 is not immune to shortcomings, and it has a fair share of downsides to consider. These include:

Slower Than the Latest Wi-Fi Standards

Even though Wi-Fi supports advanced security features like WPA2 and AES, it is still prone to hacking and malware attacks. Since the standard has been around for nearly one decade, hackers have seemingly mastered how to intercept signals and crack into Wi-Fi 4 networks.

If you are stuck on Wi-Fi 3 or any other legacy versions, it makes a lot of sense to upgrade to Wi-Fi 4 to experience faster speeds, increased bandwidth, enhanced data throughput, and better overall performance.

Even though Wi-Fi 5 and Wi-Fi 6 are already available, many end-users consider Wi-Fi 4 a reliable option. After all, Wi-Fi only supports the 5 GHz frequency band, while Wi-Fi 6 is out of reach for many people due to cost.

Moreover, very few wireless devices are compatible with Wi-Fi 5 and 6. For this reason, you can continue using your Wi-Fi 4 router without any issues.