Security cameras are everywhere today – at homes, shops, offices, roads, and highways. Many people realize the important role of these cameras to keep the premises checked. Everybody needs them to safeguard the premises.

Not that the cameras can combat intruders, but their presence is enough to deter thieves and robbers to a certain extent. Unsurprisingly, most people take advantage of Wi-Fi networks and install IP or Wi-Fi cameras at their buildings. But that leaves a popular question – do Wi-Fi cameras slow down internet speed?

The short answer is yes. It’ll have more effect on your upload speed than your download speed, but the magnitude of that effect will depend on a few circumstances like the camera’s resolution and the number of cameras used. We will list all the factors affecting your internet speed and explain them in more detail below. 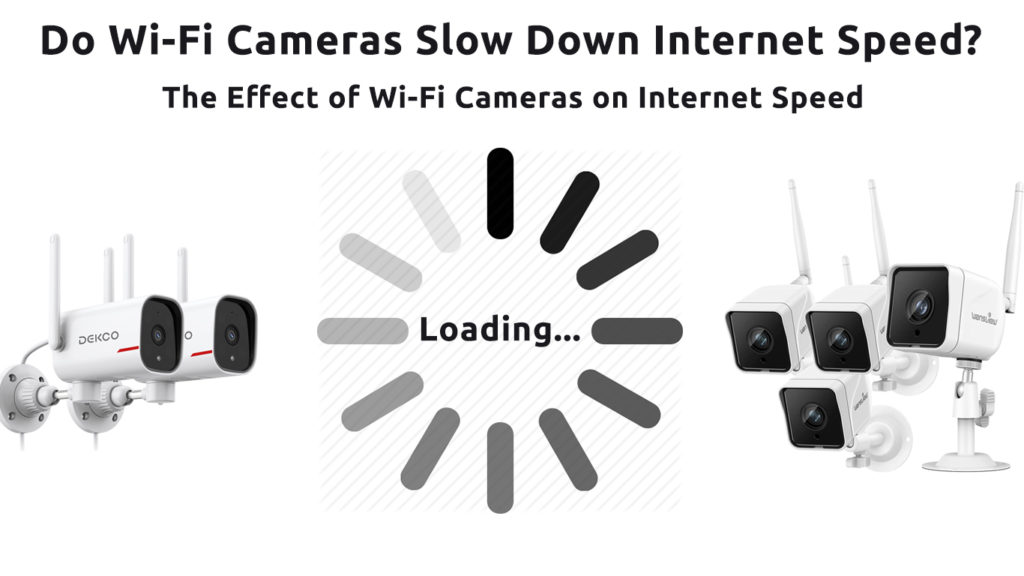 Why is it Necessary to Install Wi-Fi Cameras?

We are living in an era where technology is at its highest level. A high level of technology requires an equally high standard of security. In many instances, security cameras proved they could connect the dots to help solve crime cases. In addition, with 24/7 alert, they can capture numerous events that people find useful, not only for crime-solving but also for other purposes, such as remote surveilling or even content creation.

Moreover, it doesn’t cost that much to install Wi-Fi cameras. You probably need to part with an initial investment to buy the cameras and additional equipment. After that, maintaining its operation doesn’t cost much since you only need to connect the camera system to an existing Wi-Fi network.

When shopping for the best security Wi-Fi camera, ensure you have the following:

Several factors determine how much bandwidth your Wi-Fi cameras will use. Although they don’t consume a lot, a tiny effect can make a huge difference. Here are the factors.

Naturally, It’s much better if you have a Wi-Fi camera capable of producing higher-quality video. The reasons are pretty obvious. For instance, you cannot capture an important car number plate if you’re using a Wi-Fi camera with low screen resolution.

The downside of high-res Wi-Fi cameras is their upload bandwidth consumption – the higher the resolution, the more internet bandwidth and data it uses. Because of that, you will notice a certain drop in your upload speed.

It’s not much of a concern if you have an unlimited data plan (especially if you have fiber), but it’ll slow down your upload speed. To reduce bandwidth consumption, you could try buying a standard definition (SD), instead of a high definition (HD) Wi-Fi camera. An SD setting compromises a little bit of quality, but it uses less bandwidth. After all, you don’t need to waste HD resolution all the time when an SD definition is adequate to get the surveillance job done.

The higher your FPS is, the more bandwidth and data your Wi-Fi cameras use. Therefore, if you don’t want to sacrifice too much of your upload speed, you should be looking for 30fps cameras. A 30fps video is good enough to capture good images for surveillance purposes. Some sources even suggest that 15fps is good enough. You can easily set up what FPS you desire by adjusting it in the Wi-Fi camera settings.

Uploading Video Footage to the Cloud

It’s a good thing that nowadays, you don’t have to record surveillance on a security camera using tapes or other physical instruments. Now, it’s all digitized; but you still need to store the footage. Do you know where they are stored? Well, they used to keep it in the camera’s memory or a separate hard disk, but now they store everything on the cloud.

Use of Video Compression Codec

You can compress your video footage (and audio separately) to make the files smaller using something called a codec. The codec lessens or minimizes video files by tracking and eliminating redundant and unwanted files. Therefore, it will take less bandwidth and data to store video footage.

Your Wi-Fi security cameras can compress the video footings automatically, but you can always choose one of the most common compression standards below:

The Number of Wi-Fi Cameras

If you have a big house, you may need to install more Wi-Fi cameras to cover many viewing angles. However, with a little bit of planning, you can reduce the number of cameras needed by eliminating duplicate surveillance spaces.

Calculation of the Bandwidth Usage by Wi-Fi Cameras

There is a way to calculate how much bandwidth your Wi-Fi cameras use. If you already know the factors – video resolution, frame per second (FPS), video compression, and the number of Wi-Fi cameras used, then the formula is here:

If you’re still asking the question ‘do Wi-Fi cameras slow down internet speed?’, we would provide a definite answer – yes, they do. Especially your upload speed.

We did our best to list all the factors affecting your speed and tried to offer some solutions to reduce that negative effect. Hopefully, this article helped you get a better understanding of Wi-Fi cameras and of their effect on your internet speed.

Feel free to share your experience with Wi-Fi cameras in the comments below.