The terms Wi-Fi and Internet are not interchangeable: though many people use them synonymously, they are distinct from each other.

The main difference between Wi-Fi and Internet is that Wi-Fi is a wireless technology that allows devices to connect to one another to share data and internet hotspot without the need for any physical wired connection. On the other hand, the Internet is a network of series of interconnected networks that allow computers to exchange information with each other using the Internet Protocol. 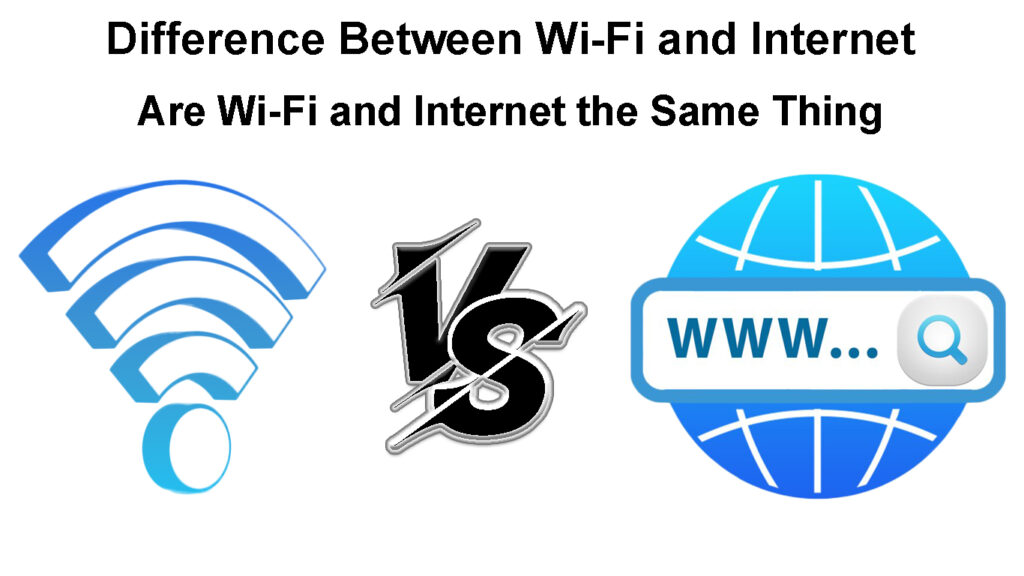 The term Wi-Fi stands for Wireless Fidelity. It refers to any type of network that uses the 802.11 standards, which allows all devices with wireless capability to communicate with each other using radio waves.

The Institute of Electrical and Electronics Engineers (IEEE) created the 802.11 network standards, which dictate how two wireless devices can communicate with each other using radio waves. The standards also manage how a device can connect to an existing network.

The radio waves that Wi-Fi uses are spread across three main frequency bands:

The 2.4GHz band radio wave is the most widely used, as it offers better range and penetration than the other two bands. The 5GHz band is newer and offers faster speeds but has a shorter range.

The 6GHz band is the newest of the three and offers speeds that are up to 10 times faster than the 5GHz band but have a very limited range.

Wireless fidelity, or Wi-Fi, uses many of the same methods as Ethernet to create a wireless network. Most modern computers and mobile devices have Wi-Fi capabilities built into them. The Wi-Fi standard is widely used in hotspots, which are public places where people can connect to the Internet using their Wi-Fi-enabled devices. Wi-Fi is commonly used in homes and small businesses to wirelessly connect devices such as printers and computers.

No Cables: One of the main advantages of Wi-Fi is that it eliminates the need for cables. This comes in handy when you want to connect multiple devices to the Internet in a small space.

Easy to Set Up: Another advantage of Wi-Fi is that it is very easy to set up. All you need is a router and an internet connection.

Portable: Wi-Fi is very portable. You can take your Wi-Fi with you wherever you go.

Affordable: Wi-Fi is very affordable. You can often find routers for less than $100.

Limited Range: One of the main disadvantages of Wi-Fi is its limited range. Wi-Fi signals can only travel a certain distance before they start to weaken.

Interference: Another disadvantage of Wi-Fi is that it’s susceptible to interference created by other electronic devices.

Security: Wi-Fi is not as secure as wired connections because it is easier for hackers to access data that is being transmitted over a WiFi network.

What is the Internet

The Internet is a massive network made up of smaller computer networks connected to each other using the Internet protocol suite (TCP/IP).

The Internet allows computers to exchange information with each other using the Internet Protocol (IP).

The IP is a unique number that identifies each computer on the network. The IP number is assigned to each computer by their Internet Service Provider (ISP).

The origin of the Internet can be uncovered back to the ARPANET, developed by the US Department of Defense. The ARPANET was designed so various government agencies could seamlessly communicate with one another.

History of the Internet

This global network of nodes was originally called the ARPANET, but after it expanded to 23 different countries in 1972, it came to be known as the Internet.

As the Internet progressed and new technologies were introduced, such as TCP/IP protocols, DNS, WWW, browsers, and scripting languages, it became a way for people all over the world to access information.

These days, people can connect their devices to the Internet using different ways. This include:

Dial-up – A modem connects a computer to the Internet using a phone line. This is the slowest type of internet connection.

Broadband – A broadband connection uses a cable or fiber-optic line to connect a computer to the Internet. This is much faster than a dial-up connection.

Satellite – A satellite dish connects a computer to the Internet using a satellite in orbit around the globe. A satellite connection is often used in rural areas where other types of internet connections are not available.

Connects the World: The Internet has created a global network that links people from all over the world. It has made communication and collaboration much easier.

Access to Information: The Internet provides people with easy access to a vast amount of information. This includes news, entertainment, and educational resources.

E-Commerce: The Internet has made it possible for businesses to sell their products and services online. This has made shopping much more convenient for consumers.

Job Opportunities: The Internet has created new job opportunities for people all over the world.

Addictive: The Internet can be addictive. People can become addicted to spending too much time online.

Distracting: The Internet can be distracting. It can be hard to focus on work when there are so many things to look at online.

Security Risks: The Internet also poses security risks. There is a risk of identity theft and viruses.

The Difference Between Wi-Fi and the Internet

While Wi-Fi and the Internet are often used interchangeably, there is a big difference between the two. The following are some of the key differences between them.

The Internet is a network of networks that uses TCP/IP protocols to connect computers all over the world. Wi-Fi is a wireless networking technology that uses radio waves to connect devices to each other and share a hotspot that connects them to the Internet.

For you to connect your device to the Internet or a LAN server, you will need a modem, router, and switch. In Wi-Fi, both routers and DSL devices are necessary to establish a Wi-Fi connection.

Watch the video below on the differences between Wi-Fi and internet.

Differences Between Wi-Fi and Internet

Question: What is the difference between the Internet and Intranet?

Differences Between Internet and intranet

Question: What is the difference between Wi-Fi and Ethernet?

Answer: The main difference between Wi-Fi and Ethernet is that Wi-Fi is wireless while Ethernet is wired. This means that with Wi-Fi, you can connect to the Internet without any cables, while with Ethernet, you need to use a cable to connect to the router.

Question: What is the difference between Wi-Fi and LiFi?

Question: What is the difference between Wi-Fi and WiMax?

Answer: Wi-Fi is a wireless technology that uses radio waves to provide fast, reliable internet access. WiMax is another type of wireless internet access that works similarly to Wi-Fi but has a longer range and can be used in places where there’s no wired infrastructure.

Question: What is the difference between Antivirus and Internet Security?

Answer: An antivirus is a software that protects your computer from viruses, spyware, and other malicious programs. Internet Security also includes antivirus protection as well as additional features like firewalls, anti-phishing, identity theft protection, and more.

Internet and Wi-Fi are both impressive technologies that allow us to connect to the World Wide Web wirelessly. While they are often used interchangeably, there is a big difference between the two.