In 2018, research showed that over 92% of US households have at least one type of computer, and over 86% of those have a broadband internet subscription. Broadband internet speeds are above 25 Mbps. So, unless you are an Amish, a member of the old order, or living in the middle of nowhere, there is a good chance you are using the internet on a daily basis.

My generation was here before the internet, and I used all types of internet connections. From dial-up in my childhood, DSL, cable internet for many years, to fiber-optics.

Except for dial-up, all of these types of connections can provide you with broadband internet speeds, and cable has the most developed and reliable infrastructure. At this point, most users in urban areas use cable internet to go online. But what is cable internet and how does it work?

Stick around to the end of this article, and you’ll find out. 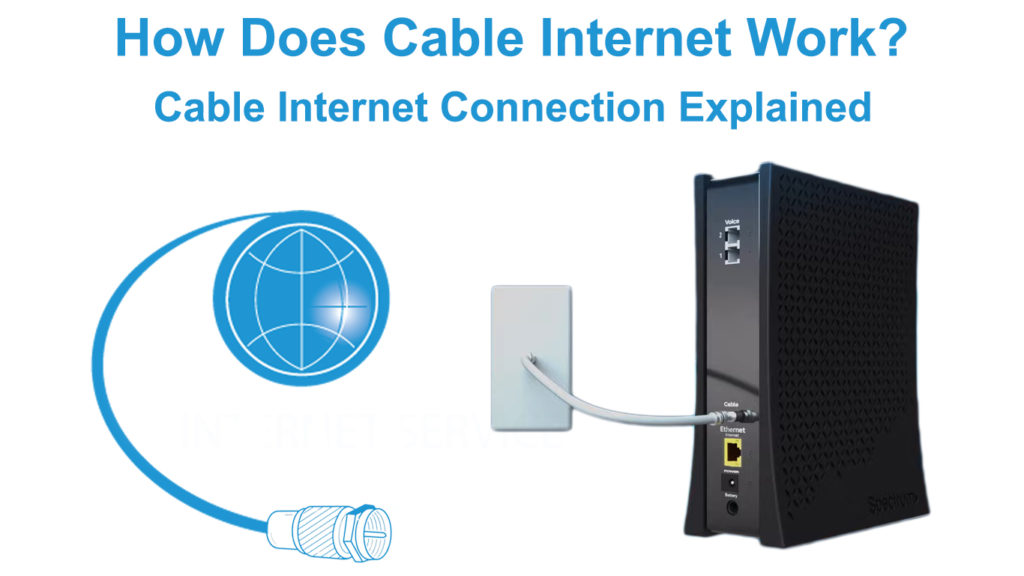 Cable Internet is just one of few last-mile Internet carriers, others being satellite internet, fixed wireless Internet, DSL, and fiber optics. Before we dive a little bit deeper into the specifics of cable internet, let’s see how data gets to and from you as an end-user.

Whenever you send an email, that email is broken down into small data packages, and each package gets a little attachment called a header. The header contains information about the sender and the destination and instructions on how to piece the packages back together.

Those packages, along with the header, are then translated into the language used by computers, in other words, ones and zeros. Each 1 and 0 presents one bit. Rows of eight bits are a byte.

Once your email is translated into bits and bytes, it is sent to your home router using radio waves or an Ethernet cable. The router passes it through the modem. Depending on the type of connection you’re using, the modem will translate those rows of ones and zeros into electric pulses or laser pulses or beam them as radio waves.

If you’re using cable internet, data will be sent from your home to the ISP through the copper coaxial cable, but we will discuss that later.

Once your data arrives at the ISP or Internet Service Provider, it is in the internet hub. Those are usually fairly large buildings filled with networking equipment. From there, your data is directed through the simplest possible route to the destination hub. Traffic between hubs is going through the internet backbone made of high-speed fiber optics cables. All that data travel and routing happens in a blink of an eye.

How Does Data Travel on the Internet?

So, what is so special about the cable?

At this point, cable internet is the most used option due to its developed infrastructure. Providers have been growing and improving cable TV infrastructure for decades, and they are using that existing infrastructure to offer internet and phone services on top of cable TV.

Before cable, the most developed infrastructure was the telephone network. However, coaxial cables can handle much more traffic than the phone line.

Think of coaxial cable used to transfer cable internet as a pipe. It has a pretty large diameter and can handle a significant amount of traffic. TV uses only a small fraction of that to get the signal through and leaves plenty for other purposes, like internet data packages. Furthermore, the internet data is completely separated from the TV or phone data by using different frequency bands.

When you sign up for cable internet, you can expect download speeds between 10 Mbps and 500 Mbps. The upload speeds usually vary between 5 Mbps and 60 Mbps, which is more than adequate for most users, especially if you’re not frequently uploading large files like ultra-high-resolution videos.

However, cable internet has one major downside. Available bandwidth is distributed evenly among connected users. Therefore, if you live in a densely populated area, you might experience major drops in internet speed during peak hours when everyone in your neighborhood is streaming videos or playing online.

How Does Cable Internet Work?

Now that we explained how the cable internet works and discussed some good and bad sides of using it, let’s stack it up against other wired carriers.

Differences Between Cable and Other Internet Connection Types

Even though the cable is the most popular and widely used type of internet connection, it’s far from being the only one or even the best option you can get, especially in well-developed urban areas with many competing providers and infrastructures.

This article won’t explore and compare wireless connectivity options, but let’s see how cable internet stacks up against DSL and fiber optics.

DSL stands for Digital Subscriber Line and it is a technology that allows high-speed data transfer over existing phone lines without interfering with the phone calls. That is achieved by using a higher frequency range for the data than the one used for phone calls. Before DSL, phone lines were used to transfer data on the same frequencies as phone calls, and that resulted in slow speeds and the inability to use the phone and data simultaneously.

ADSL upload speeds go between 384 Kbps and 8 Mbps, while download speeds can almost match the cable internet with speeds up to 400 Mbps.

How Does DSL Internet Work?

Availability – Since DSL uses phone lines, it utilizes the infrastructure developed for many decades.

Exclusivity – Unlike cable internet, users don’t share the bandwidth with other users. Connection to the ISP belongs to him and him alone.

Flexibility – If the operator provides both ADSL and SDSL, you can choose the type that best suits your needs. If the upload has a high priority for your internet use, go for SDSL. If you download more than you upload – ADSL

A major downside of DSL is the fact that the signal weakens rapidly when you need to use it far from the source. That is not a big issue in cities, but if you live in a rural area, your Mbps internet plan might drop down to Kbps, depending on your location and the distance from the signal source.

The fiber optic internet is the latest and greatest widely used technology to transfer data over the wire. It uses lasers to shoot the beams of lights over the glass fiber at incredible speeds, thus leaving far behind both the DSL and cable internet.

It can deliver speeds up to 1 Gbps to the end-user with almost no latency. If you can get fiber optic internet in your area, you should definitely go for that option.

How Does Fiber Internet Work?

High speeds and low latency – Fiber optic delivers much higher upload and download speeds. Furthermore, since the bandwidth doesn’t have the same separation as with DSL and cable, the upload will depend mostly on the provider and their policies. In other words, you can get matching upload and download speeds if the ISP decides to offer those plans.

The infrastructure – Fiber optic infrastructure is being built from scratch. That means it will be a while until it becomes available for most users.

The cost – Fiber optic internet is the most expensive option of the three. Yes, it offers the most but at the highest price. If you don’t need those speeds, you might want to consider one of the less expensive options.

Basic differences between cable, DSL, and Fiber optic internet you can learn by watching the video below:

The cable internet works by utilizing existing cable TV infrastructure and coaxial cable to transfer data. It does it using different frequency ranges than the TV and voice signal. The signal travels from the ISP to the end-user, then gets filtered by the modem and other devices in order to forward correct frequency ranges to separate devices.

The greatest upsides of cable internet are availability and cost. Since it uses developed infrastructure, it is readily available in most areas, and the competition is strong, allowing lower internet plan prices and costs. It offers high-speed internet with upload speeds up to 60 Mbps and download speeds up to 500 Mbps.

However, there is one major downside. Since all the users in the same area share available bandwidth equally, your internet speeds may drop significantly during peak hours, especially if many people start streaming high-resolution videos or downloading some other large files.

Compared to other wired internet technologies, it offers a good balance between availability, speed, and cost.